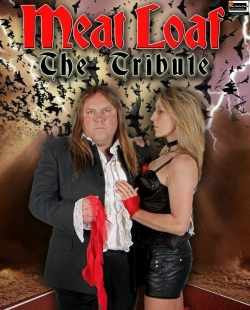 The entertainment on offer in Benidorm is second to none.... and many choose the resort for that very reason. You can come here for a week and not get around even a fraction of what is on offer. Whatever your taste in music, two of the most iconic songs which virtually everyone will know are "Bat out of Hell" and "Dead Ringer" - both rock power ballads by Meat Loaf, often murdered on karaoke machines worldwide but you can hear a fantastic rendition right here.

"MeatLoaf Benidorm" is made up of singing duo Simon Ruston and Lesley Ann Cawood - both experienced and highly professional singers who give 110% when on stage. The pair have been performing together for many years and are exclusive to ´Touch of Class´ group and currently perform in Jokers, 11pm every night except Sunday - check their Facebook page ´Meatloaf Benidorm´ for an up to date itinerary. 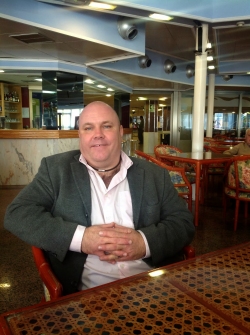 I met up and had a chat with Simon, who many have said is even better than Meatloaf himself, although as Simon joked he certainly doesn´t look like him - often referring to himself during a performance as the "fat bald bloke with a wig and frilly shirt"! His tongue in cheek humour definitely comes across and his spirit and character is what endears him to everyone that goes to watch him perform.

Simon arrived in Benidorm 7 years ago, leaving behind his (and my) home city, London. He ran a hugely successful fire installation company - but as those who run businesses know, its a 24 hours job and Simon was feeling it. So they decided to uproot and move to Benidorm - which I bet many of you would love to do, where he had spent many happy family holidays throughout the 70´s.

They arrived and bought a bar in the Old Town, but that only lasted for 6 months, a sad fate for many but that spurred him back to his true passion - singing and performing. He was a professional singer back in the UK and had been part of the 70´s rock band scene from the age of 15 - he even toured around the United States in his late teens with a band... a true rocker! As well as music his other love is sport - he was a keen rugby player but what will probably amaze you is that he was also a wrestler, as in Big Daddy with leotard and was picked for the Commonwealth Games... so don´t mess with him is my advice! 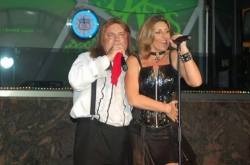 The Meatloaf performance is a full theatrical show lasting 50 minutes, incorporating costume changes and a lot of interaction with the audience. It has to be one of the most high energy shows in town, and they give it their all every time, regardless of how many in the audience - the sign of true professionals. Many that watch them go back again and again and the pair are always delighted to speak to their fans after the performance.
Whether or not you are a Meatloaf fan, you will certainly leave in good spirits and with a smile on your face... humming away!

0 #2 Juan 2015-10-07 14:54
While on holiday I had the wonderful opportunity of seeing this fantastic show twice, which blow me away and brought back so many wonderful memories of time when I was in love. Muchos gracias
Quote
-1 #1 Bridget Daly 2015-03-28 11:15
Saw them last year, absolutely brilliant. Do they hire out for events?
Quote
Refresh comments list