Actor Jake Canuso aka Mateo from the "Benidorm" series 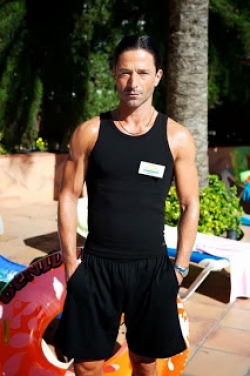 Actor Jake Canuso, otherwise known as Mateo in the ITV hit comedy "Benidorm" is probably the most recognised of all the cast in the series and constantly being mobbed by fans where ever he goes. But as he told me, it goes with the territory and he is very appreciative of the huge fan base he has built up thanks to the series - he has over 46,000 followers on twitter!
I remember Jake from the "Cobra" beer advert many many years ago, where he raised his eyebrows very provocatively... a role that seems to have followed him with his current character in the Benidorm series!


Everyone associates Jake as the "sleazy promiscuous Spanish barman" but you couldn´t get any further from the truth in real life - he is a lovely guy and certainly a very good actor. He hit our screens from the very first episode and told me that when they wrapped, the cast all said their goodbyes to each other not really thinking they would be back again... how wrong were they! The cast and crew first descended on the resort in 2006 to film series one and Jake told me that they all stayed in hotels in the centre of town. He wasn´t so well recognised then and could quite comfortably walk about - but seven years on he creates pure pandemonium whenever he is seen.

Jake has been acting for 10 years now having entered the entertainment industry as a trained dancer. Born in Switzerland to Italian parents, he is fluent in several European languages - and his Spanish is excellent. He had some basic knowledge as his sister lives in Mexico, but since returning to Benidorm year after year it has improved immensely - I remember hearing him in conversation with the Mayor Agustin Navaro and he can definitely hold his own. He moved to Paris at the age of 16, remaining there for 2 years before relocating to London - which is now home.... obviously when he isn´t away filming.

His agent is constantly bombarded with offers and requests and I was curious to know why he chose to take part in the ITV celebrity diving show  "Splash" earlier this year. He came runner up with "Eddie the Eagle Edwards" winning and interior designer Linda Barker coming in third.... but it must be said he definitely came top for fittest body and tiniest swimwear - but boy did he look yum!
He "liked the challenge" was his response, plus he was a huge fan of Tom Daley and had met his father Rob before his tragic death from brain cancer.

Jake was obviously a competent swimmer but had never done any sort of diving, apart from the edge of the pool when on holiday like most of us - well I excluded myself from that statement! The contestants had just 2 weeks of training before the show - and only 2 hours per day, otherwise I suppose they would have resembled a prune had it been all day. Jake trained with Tom twice a week down in Plymouth, which is where Tom is based then the other days in Southend by Bill and Damien who are both Olympic trainers. The show took place in London so he spent more time commuting between the 3 locations than in the pool. The first day he was strapped into a harness and had to practice twirling and diving off a dry board and by the second day he was on the 3 metre board at the poolside, but still in the harness which helped to guide and control his entry into the water.

Jake is extremely fit, which was most obvious as we got up close on the sofa but he admitted that he discovered muscles and pain like never before despite being a regular gym goer - he even manages 3 sessions per week whilst here filming in Benidorm! They all suffered injuries and Jake´s was well documented when he hit the bottom of the pool, cutting the bridge of his nose open. Fortunately he didn´t break it but it had to be glued together and initially there was doubt as to whether he would be allowed to dive again as there is a health & safety policy about entering the water with an open wound. But fortunately all ended well and we saw Jake in his itsy-bitsy speedos - 2 of which he has very generously donated to auction for a children´s charity in Calcutta.... well done Jake, I hope they raise lots of money.

So what are his plans once filming finishes I asked. Well he is taking a well deserved break - and as he loves the area so much will stay here, with his parents and sister coming over to join him - I bet they won´t know whats hit them when they go walking about he is mobbed in the street!

But he will be back - yes next year for series 7 which is fantastic news but much sooner than that - in July to launch his 2014 calendar! Let me tell you, I have had a sneak preview and boy, will he set temperatures rising - the pictures, many taken here are by an amazing Scandinavian photographer and I assure you absolutely breathtaking. Once dates have been confirmed Jake will let me know and I will in turn publicise what is bound to be a very well attended event, which will take place at Mateos second home here - Neptune´s Bar - aka Morgans Tavern!  He also has a beach towel in the pipeline - can you imagine lying on top of him in his scanty speedo trunks... a definite Christmas wish list item!

Jakes other recent projects include "The Bible" an American production which was also recently broadcast here in Spain- where he was cast as Daniel Prophet with a completely different look and also as Frances Barbers lover in another Tiger Aspect production "Bad Education". I am confident we will see much more of this hugely talented actor - and delighted that he "cut his teeth" here in our fabulous back yard.
I was even lucky enough to receive a "Solana" All Inclusive wristband from Mateo....

+1 #3 Steven 2017-05-07 22:02
Ok i will admit that mateo is one of my favourite prople in the show but not as much any more, he was so much better in earlier seasons when he was a "dirty git" who wasa always shagging every woman ( and even troy) but since season 5 his charachter has been tamed down , a LOT! Would much love if he would go back to his old ways. And anoher thing is that he used to be a mysterious and more suitable for only adults and now he is a boring predictable charachter who you would not expect to do anything unpredictable. Script mateo to be what he was like between season 1-4 Please
Quote
+2 #2 smithy 2017-04-11 13:30
Benidorm is the best show ive seen ive looked at all the series but sory the new family has to go..its not as fun anymore..we need the old cast back and watch the rating go tro the roof..your killing the show wit dis new family..mayb bring in a stoner in2 it
Quote
0 #1 Una Neary 2016-01-27 15:18

Love the show. Just watched all 7 season on Sky Box sets. Jake (Mateo) is my absolute fave.
Series 8 is not the same without the Garverys. Not keen on the new family but Mateo is back and now Madge is back its fab. Miss Liam - he is such a great character also.
Long may the show live and Mateo (Jake)
Quote
Refresh comments list