Over 11 years after the introduction of the euro, the 17 countries which share the common currency have started introducing a second generation of bank note - starting with the 5 euro note.

One of the primary objectives is to make it more difficult to forge - and so includes many more security features.  The ends have a ridged edge, include a hologram strip and watermark and the number 5 appears in a shiny emerald coloured hologram which changes to a blue colour when tilited . The new note is the same size but the colour has also changed slightly, from a greeny colour to a more bluey one and the word "euro" now also appears in Cyrillic for the East European countries. An image of the Greek goddess Europa also appears on the note. 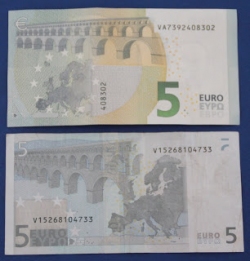 The new 10 euro note will be introduced next year and the 20 euro note is set to follow in 2015. The new 5 euro note will circulate alongside the existing one and no date has been given for the expiry - so don´t worry if you keep them from your previous holiday.

As you pay for items you may receive a mixture of 5 euro notes, so don´t worry that they are forgeries! However not all automatic machines have been programmed yet to accept the new notes. I was behind a lady at the pay machine in the car park below the Town Hall and the machine wouldn´t accept the new note - luckily for her I had a spare one and swopped hers for the old type so she could get out!