Last day of the Benidorm Fiesta

The torrential rain and wind caused some disruption to the festivities yesterday, but the bars were still full - albeit inside!

The traditional "humor parade" had to be changed... rather than floats parading down the streets it was relocated to the giant tent on the Town Hall Square, which unfortunately meant that some of the penyas could not take part as they were too big. This is such a shame as they spend the entire year fundraising and rehearsing for this one day. The parade is a dig at local and national politicians - a bit like the old satirical puppet show on ITV,  "Spitting Image" where they used charicatures of major public figures.

But what a difference 24 hours make.... the sun is out today and so are all the locals and tourists. The Town Hall Square was full of people waiting for the "mascletas" to be let off at 1pm.  Mascletas are an explosion of firecrackers - they are not so much a visual display like fireworks but instead make LOTS of noise!
Green plastic chairs are being put out and lining the main streets such as Calle Ruzafa where the parade will go down this afternoon. So it looks like the last day of the fiesta will at least go ahead as planned.

I made my way down to the Poniente Beach, just beside Dove Park this morning and sure enough the fireworks for tonights grand finale are going out.
An army of technicians are digging in the sand and placing them in position, ready for the planned 9pm light up.

You will be able to see them from most of the Old Town - a great vantage point will be up at the Mirador. But if you plan on making your way up there, then get there early as it is bound to be packed. The parade is due to start at 5.30pm... fingers crossed that the rain will keep away today. 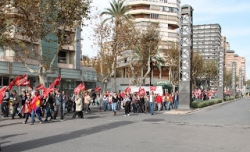 Today was a European Day of Action against austerity and strikes have been evident across most of Spain and Portugal. I passed a group of stikers on a protest march going down the Avd Europa and then parading along the Levante sea front.... Im sure that later they will enjoy the fireworks though!