The IVA increases, announced in July by Prime minister Mariano Rajoy came into force at midnight - making the general rate 21% - 1% higher than in the UK. However, where the difference becomes really apparent is on the utilities. In the UK gas, electricity and heating oil is charged at a reduced VAT rate of 5% but here in Spain it is subject to the full standard rate, which is now 21%!

Only this week an EU court has ruled that the British Government must pay the Winter Fuel Allowance to ALL expats of pensionable age - previously the Government was only required to pay allowances to British people living abroad if they reached a pensionable age in the UK before moving abroad. There is much controversy as to whether they should be allowed - I am of the camp that yes they do, especially if like myself you paid full contributions into the UK system whilst working there. For those that never put into the system thats another story. Much like the illegal immigrants turning up on the UK doorstep and receiving handouts never having paid a single penny into the UK system, these pensioners HAVE paid their fair share so should be entitled. It does actually get cold here in Spain during the Winter months and with the increased IVA rates I think that more and more will be looking into how to claim the allowance. (I would but Im just a few decades too young yet!)... ironic how we are mentioning Winter Fuel payments and the Costa del Sol is engulfed in wild fires.

The biggest jump that will be felt the most (by parents), is items that were in the super reduced rate category of 4% now jumping up to 21%. This 4% rate included school materials such as exercise books which was apparent when I went into Carrefour in the week and parents were stocking up more so than usual... me included. Obviously the Spanish Government doesn´t view education as important - text books must already be the most expensive in the world.. as there is already 50% youth unemployment it appears that Rajoys policies is waste money to subsidise this sector. They have also taken away the 400 euro monthly benefit for those that live at home and their parents are in employment. I pity the next generation!

Items which go from the 8% reduced rate to general 21% rate include:
Hairdressing - I spoke to a local hair salon owner to ask whether prices had gone up and unfortunately she told me that they had. Being a small independent salon, with staff to pay she could not afford to absorb the cost and is very cross about the forced increases. She has made posters and printed leaflets explaining the increases but feels that it will ultimately result in a drop in business as people have less money to spend on what is deemed a luxury.
Healthcare and dental treatments
Supply & reception of digital television services - which includes UK satellite stations.
Sport - classes and rental of equipment. In the UK this category is exempt from VAT.
Golfing - which comes under sporting have gone up. Prices generally go up on 1st September, but this year there is a duble wammy with the IVA increase too. The price of leisure is getting expensive!
Veterinary services - it´ll cost more to have your pooch vaccinated and groomed now!
Flowers - odd one... wonder whether the Indian chap selling single roses in restaurants knows!
Entrance tickets to theatres, cinemas, shows & attraction parks. 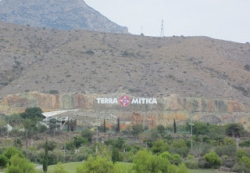 I checked with the theme parks in Benidorm and yes the entrance prices HAVE all increased... with most of them rounding up - no surprises there then

Terra Natura was the only theme park to round down rather than up!

I also spoke with Benidorm Palace owner Christine Climent to ask about the IVA increases and how it will affect the ticket prices. For the immediate future they are keeping the prices the same and trying to absorb the 13% increase - but this may change. They are aware that the economic climate is difficult for holiday makers and want as much as possible to make this IVA increase as painless as possible for them. My advice if you are planning on going is get your tickets this week at the current price.... you can always change the date later, as unlike Ryanair they do not charge for a date change!

Surprisingly cigarette prices have NOT gone up... obviously the manufacturers are making so much profit they can afford to absorb the increase!