Benidorm to Denia tram may close 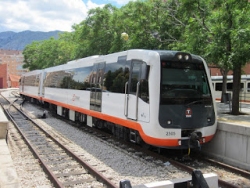 According to workers of the the popular FGV Tram, Ferrocarril de la Generalitat Valenciana, the service between Benidorm and Denia "could close due to failure to invest in its maintenance and improvement"!
The FGV is the Valencian public railway company owned by the regional government which was founded as a company in 1986 - prior to that railway system was part of the nationally owned FEVE.

A group of workers from the FGV purposefully launched an awareness campaign last Saturday night at La Olla station, the night of the Castell de lÓlla fireworks, knowing that it would get maximum publicity as over 4000 people used the service that night. I stood on the platform of Alfaz del Pi for the 21.08 service and half of those waiting couldn´t get on it was so packed. 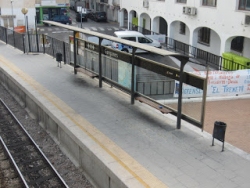 At "Garganes" railway station in Altea, situated behind the Town hall in the middle of Altea - and the nearest station to the Tuesday market they still have a banner attached to the railings highlighting the protest.

The President of the Generalitat, Alberto Fabra, neither confirms nor denies that the service may be withdrawn but made a statement saying "We are in times of adjustments and now we cannot invest in the trenet because we are focused on ensuring essential services to our citizens"

The tram service was built in 1914 and ran from Alicante to Altea, then in 1916 it was extended onwards from Altea to Denia and since 1999 sections started being electrified and converted to the current tram system. The famous Lemon Express tourist train ran along these lines from Benidorm to Denia but was "retired" in 2005 once the tracks had been changed to accomodate the new trams.

Between Benidorm and Denia there is an hourly service and it is very popular, especially with tourists who like to explore the Costa Blanca. Rather than drive it is far easier to jump on a tram from Benidorm to Denia and not have the hassle of navigating foreign roads, trying to find somewhere to park and incur the cost of the AP7 toll, which will increase yet again on 1st September with the implementation of the new 21% IVA rate.

The price of the tram is unbelievably cheap.... it is structured on zones, similar to the underground system in London. One zone is just 1.25 euro and even to go through all 6 zones, ie Alicante to Denia would only cost you 6.75 euro one way or a discounted rate of 11.50 euro return. Can you imagine how much that journey would cost by taxi!

It would be a real shame if the service is suspended. Even if you don´t use it that often it certainly worthwhile having and a bonus to take your guests on when holidaying over here. Mine all love looking at the beautiful countryside and its great knowing you can enjoy a glass or two of wine with your lunch and not have to worry about driving all the way back on the motorway.

Remember, a zero tolerance on drink driving has just been passed - although not publicized widely this is probably to catch you unaware. Iam sure that the Guardia Civil will be out in force checking... they certainly already do late at night but maybe they will now start stopping cars after the traditional lunchtime period. You have been warned!