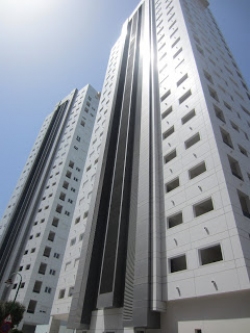 Controversy continues around two towers blocks, known as Gemelos 28 which were built at Punta Llisera, a few metres from the Levante beachfront in Benidorm. The Supreme Court has withdrawn the authorization that was granted for the construction of the two 21 story tower blocks even though they are finished and the fact that  over 100 of the 168 luxury homes are already sold, with many of them occupied! The owners are now in a dilema of not knowing what will happen to their homes.

The building permit was granted on 6th June 1988 by the Mayor subject to a detailed study being carried out. The study was approved after being passed by 10 of the 11 Councillors only 2 months before the new Coastal Act came into force, prohibiting construction along the coast. But then in September 1989 the then Mayor Manuel Catalan Chana withdrew the permission. Since then it has been ping ponging back and forth between various courts and finished with yesterdays Supreme Court ruling. The constructor, Ballester was told that the initial approval did not give give the right to go ahead a build. 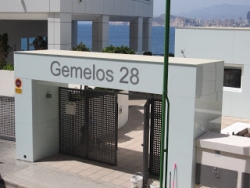 The builder is now looking at every possible option to try and legalize the complex and will submit an appeal to the Supreme Court. To date they have accumulated six judgements in favor at the High Court of Valencia. The deputy Mayor, Gema Amor was at the court to hear this latest ruling alongside Conrado Hernandez of the construction company and they issued a joint statement on the matter "We have acted according to the law and in compliance with the various court decisions in relation with the construction of the towers".

The Mayor, Agustin Navarro has already scheduled two meetings with the Department of Land and Housing and the Ministry of Environment to discuss possible action. It is highly unlikely that the Mayor would order the buildings to be demolished, but then it may be out of his hands.... The constructors of the infamous Atrium building in La Cala Finestrat had to pull down several floors after they were found to be in breech of the license which was granted - and nobody thought that would happen. Most assumed that they would get away with just paying a fine.

What I find rather strange is that these tower blocks did not go up overnight. Surely if they were in breech of regulations then the police would put a stop to any further construction by tapping the area off until the situation was resolved. You may have passed a house that has police tap across it... this is were works have been halted as incorrect or probably no planning permission has been granted. Its a rather long winded process and why you see much building activity going on over weekends, when the Town hall is shut and so inspectors aren´t on the prowl. They tend to drive around urbanisations looking out for any skips or sign of builders vans and knock on the door to ask "Permiso de Obra" - the building licence granted by the Town Hall to allow you to do carry out any works. If you do not have one he will call the local police who will tap the area off.

Planning "irregularities" are not uncommon here in Spain - there has been much press coverage about illegal homes being built along the Costa Blanca over the years, with corrupt official taking back handers. In the Valencian Community there is also the controversial Land Grab Law. The Valencian Government passed the LRAU land grab law in 1994 to speed up urban development which ensured that new developments were built with sufficient services and facilities. However, the law was badly drafted and it was left open to abuse by unscrupulous developers with many property owners being forced to sell part of their land at well below market value and on top of that billed for the construction of roads etc. The British Consulate has and is inundated with requests of help from many ex-pats affected by this law.