The legend of Benidorm - Sticky Vicky

According to El Pais, a national Spanish newspaper, under today´s "Culture" section is a piece about the radical contrasts of entertainment on offer in Benidorm.
Walk around the Rincon area and virtually every bar and club has a board outside listing the various entertainers and tribute acts on with the times. Entry to these places is free - all they hope is that once you are in you will stay for the night and purchase drinks.  Yes the prices are slightly more expensive but then the entertainers have to be paid.... if it was a club in the UK you would also probably be charged an entry price just to get in.

You can hear and watch a huge variety of very talented people, ranging from tribute acts such as Peatloaf, Girls Aloud, Lady Gaga, Michael Bauble, Black Eyed Peas as well as those singing under their own names such as DebnHer to comedians catering to all tastes and last but not least, The Legend ... Sticky Vicky!


Under the banner of "Vicky Leyton Magic Act" she performs a two fold act with her daughter Demaria Leyton, who puts on an acrobatic show before her mother´s debut. However, it looks like Demaria is looking to take over from her mother as she is now performing a similar act alternatively to her. She has probably become the talking point of the town and most holiday makers go and watch her just to see if the rumors are true! Her first performance is at the "Rose and Crown" and it is packed with Brits vying for front row position, cameras in hand.... really!

And you would imagine that it is mainly men that go to watch - well surprisingly you´d be wrong! There are probably more hen parties vying for front row position than any other group.

Vicki is originally from the Canaries, now nearing 70 years of age and was trained as a classical ballerina in Barcelona. After the fall of dictator Franco there were no restrictions on what could or couldn´t be done -  obviously I am talking legal things here. Vicki decided that she needed to reinvent herself and the demand from the clubs at the time was for "exotic shows", so along with a magician friend she somehow came up with her original act!


She has been doing her routine for the last 30 years, performing seven nights per week and several times per night - she only takes New Years Eve off! Walk through the English quarter and you will see her banner hung from at least half a dozen clubs, displaying the time when she will be on there. You won´t find it difficult to catch her somewhere....

Now according to El Pais - their words not mine " Her show consists of pulling objects out of her vagina: Coca Cola bottles, giant candles, light bulbs... somehow glowing, and real razors which she asks a member of the public to test by holding a piece of paper that she can cut with the said razor and for her finale, a bunch of flowers!" At Christmas time its a Christmas tree.... 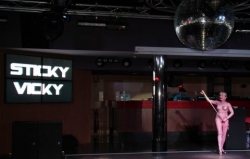 I should think that at this point for those that have not experienced it, ladies are sitting there cross legged and men are open mouthed. Her daughter had been starting the show by performing a very skillful balancing act which lasts for about 10 minutes - however, she is now also following in her mothers footsteps. Vicky arrives on staged fully clothed and performs a little dance, during which she removes all her clothes and then begins her act. She is more than happy to pose for photographs during her show. Her show lasts maybe 15 minutes then she picks up her discarded clothes and props and goes onto the next venue.

Its a matter of personal choice I believe whether you go and watch her - its almost a right of passage, especially for the stag and hen groups. It certainly fills up the bars - I think if it wasn´t for her then some of them wouldn´t still be in business. So whatever your opinion she certainly deserves an award for sheer bottle doing what she does. However, Im still puzzled as to what gave her the idea for this unusual act...