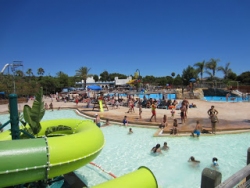 There are 2 water parks in Benidorm and often visitors are baffled as to which one to go to during their stay. Aqualandia is certainly bigger, has more slides and is great for the older kids or those that are more adventurous. However, if you have younger children, say under 12 or are not too keen on giant slides I would definitely recommend Aqua Natura - and I was surprised to discover a little secret there too ...

Aqua Natura is located beside Terra Natura Wildlife Park and you can purchase a combined ticket allowing you to visit the animals first then go on and enjoy the water park - it makes a fabulous day out.

There is certainly no shortage of slides, plumes and activities to keep you amused at Aqua Natura - and because it is on a smaller scale its easier to keep an eye out for your children.
Lifeguards are positioned at the top and botton of each slide to ensure safety and that the previous fun seeker has cleared the drop zone - they are certainly safety conscious which is reassuring.  If you are unfortunate enough to require any medical assistance then there is a large first aid station located in the park. 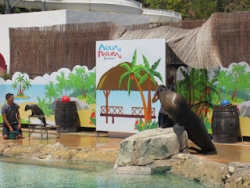 I was surprised to discover that twice daily they have a Sea Lion show there too - at 1.30pm and 4pm... I never realized that they even had sea lions. It was certainly very popular and almost every seat was taken for the 1.30 show that I attended. The voice over is in both English and Spanish but its really a visual show so you don´t need to be able to understand anyway.

When the trainers came out with the two sea lions the crowds let out a very loud "ahhh" and  they proceeded to perform several tricks and routines. They started by dancing to "Lets do the Twist" which got the crowds excited and cameras clicking. 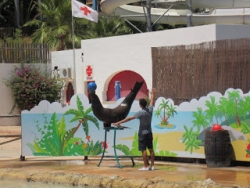 The skills exhibited by both the sea lions and the trainers was incredible.. they obviously have a very close bond - but the fish treats they were fed between routines encouraged them too I should think!

The show lasts a little over half and hour and at the end you can have your photo taken with the sea lion. There was certainly a lot of families queuing up.

After all the photos were done I noticed a group that were changing into wetsuits so went over to enquire what they were doing to discover you can have a "Sea Lion Experience". For this there is a charge of 30 euros per person  - the show which we watched beforehand was free. 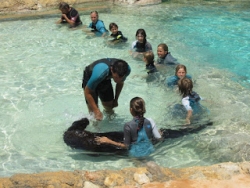 There were nine in the group - who were all very excited, including the adults. The only requirement for this is that you are a confidant swimmer - no age restrictions. The trainers also changed into their wetsuits and joined the group with one of the sea lions.
They each had a turn to have their photo taken with it then the trainer lined them all up so that they could touch and play with him whilst he taught them a little about sea lions... so educational too. 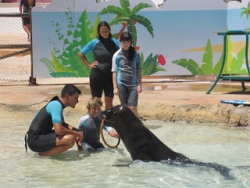 They took it in turns to throw a hoop into the water and for the sea lion to retrieve it and bring it back - giving them a kiss which got everyone in hysterics. They also had to go to the other end of the pool area and lie on a float whilst the sea lion pushed them to the other end with his nose. Its incredible that they understood the command "push" from the trainer. Towards the end of the session they were given a mask and snorkel and taken to the deep area where the other 2 sea lions were kept and allowed to swim around with them for about 10 minutes. There is an underwater viewing window where you can watch and take photos from. The session lasted over 45 minutes... I think it depends on how many in the group really. If there are less then probably 25 - 30 minutes but everyone gets one to one contact which is a fantastic experience and something the children especially won´t forget... maybe I´ll give it a go next time I visit.

After that session I went and spoke to Miguel, who is the head trainer to ask about the animals. They actually have a total of 10 sea lions and 4 seals, which they rotate for the shows. He took me round the back (no funny jokes please) to show me where the rest were kept, which was inside and away from the heat and light. Inside a huge hanger there were 3 large tanks where the other sea lions were happily swimming around.... they were also looking after a blind one - I really let out a loud "ahhh" to that. He went blind 7 years ago due to cataracts which is very common apparently as they age. It is too risky to operate on them so they just feed and look after them... a sea lion lives to about 25 years in the wild but longer in captivity as they are looked after.

Miguel was also excited that they have a sea lion literally about to give birth to a baby - it was due any day. A sea lion´s pregnancy lasts 1 year but it gives birth on land as the baby cannot swim until it is about 3 weeks old. At night when the keepers go home they have to make sure that she is taken out of the water incase she goes into labour. The baby´s diet for ap the first 10 months is milk from its mother them it is gradually introduced to small pieces of fish - its like weaning a baby.

They have 2 different breeds of sea lions here - Patagonian and Californian. The Patagonian are bigger and calmer and have a flat nose whilst the Californian ones have long noses. In the wild they use their long whiskers to detect fish under the water, which is useful if the water is murky and they cannot see too far ahead. The blind sea lion uses its whiskers to detect the edges of the pool so that he doesn´t bump into them!

I asked Miguel how much fish they needed as during the show they seemed to be fed after each trick or performance. The largest sea lion they have weighs 300kg and he gets through about 4.5kg a day but in the Winter that goes up to about 12kg - as with humans they eat less in the heat! (I bet Captain Birdseye would love that contract) They rotate the sea lions they use for each show as the water temperature in the performance pool gets up to around 30 degrees and the direct sunlight is not that good for them.

Miguel has been at Aqua Natura with the sea lions for 6 years now but he has travelled all around the world. Whenever a marine park wants some he will go with them and train the sea lion then train the keepers, showing how to look after them. I asked him how long it takes to train one to perform the tricks that they did today. He said that a lot of it was medical behavioral training. They have to train them inorder to carry out medical checks on them so for instance in one trick the sea lion lay as if asleep. This is the position that they adopt when they have a blood test so the keeper issues the command for that position.  It can take many years and they build up relationship over time - they are his children he told me.

Baby sealion update....  the zoo are delighted to announce the birth of a baby boy today, Friday 27th July which weighed in at a massive 8 kilos and measured 45 cm. Mother Lola is doing well and nursing the new born. This is the first time that the Aquatic complex here has had a baby of this species born and the birth was natural with no complications we are told.