Well I made it to the Hotel Bali yesterday morning to find that the base jumping had been suspended due to high winds .... what a disappointment - both for the contestants and the spectators. However, it gave me the opportunity to stop and chat to some of those brave enough to be taking part.

As well as the competitors there was a display team  "Sky Force" that was there to do some demonstrations. I managed to have a chat to one of the jumpers, Santi Corella. He had come down from Barcelona for the 2 day event and has to date done over 16,000 jumps - no I didn't accidentally put an extra zero on that! He has been jumping for over 26 years and is actually a sky diving instructor. He told me that yesterday (Friday) the winds had been fairly strong and one of the contestants, a fellow Spaniard called Jose had been blown off course and landed on the glass roof of the hotel restaurant, shattering the glass and injuring himself fairly badly.

The Hospital Clinica Benidorm ambulance which was on stand by swung into action and Jose is now recovering there. I asked Santi whether that will put him off and he said probably not ... the problem was that he wasn't a very experienced jumper, only having done about 100 and jumping from the Bali hotel is actually quite dangerous he told me - I would never have guessed that! He said you really need to be very experienced before contemplating such a building .... well I'd better leave it till next year then.

The group have been to all sorts of amazing locations to jump - the team is made up of 3 jumpers, 3 climbers and a camera man. Their next trip is to Greenland in August and it will involve a 1400 metre climb up a mountain before jumping off the top, hence the need for climbers to guide them up. Santi's most memorable jump was across the Strait of Gibraltar where they landed in Algeciras - it covered an incredible 20,000 sq/km and reached speeds of 208 km per hr. One of his colleagues told me that Santi is the equivalent to Michael Schumacker of BASE jumping.

The spectators were told that if the winds died down enough then they would try again later on - so I returned at 6pm, along with about 200-300 others and we were duly rewarded. There was a "target" mat laid out on the ground which is what the jumpers were aiming for. The spectators were probably only about 25 metres away from the landing site - something Health and Safety officers in the UK would be frowning upon I am sure. 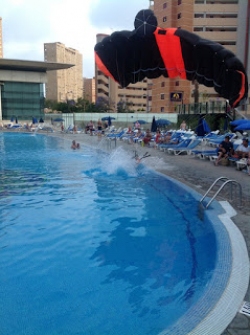 Just before a jumper "took off" from what looked like a diving board to me, it was announced "10 seconds to take off" and everyone looked up with cameras in hand - ready to click away. I must say that my heart stopped every time, until I saw the parachute engage! It really is a heart in the mouth moment and you are willing it to open quickly - there is no room for error.

Most of the jumpers landed on the target mat but on one jump a slight breeze whipped up. As the jumper was coming down he was blown off course slightly and you could see he wasn't going to make it. Everyone ducked as he overshot the mat and he flew over our heads landing in the swimming pool behind us. Luckily there weren't many swimmers in that part of the pool at the time ... but the man and his son a little way ahead were a bit shocked I think. I just happen to be in the right place to capture the splash landing. When he got out of the pool he was asked how he was, to which he replied "wet" !

After they had jumped they went inside the hotel and laid the parachute out on the ground. They then carefully folded and pleated it into place, checking that the chords weren't tangled before replacing it back into the backpack ready for the next jump. After a brief rest they took the lift back up to the top to repeat the process!

It was certainly a memorable day for me and most of the others that came to watch these brave men - oh actually, there was one female jumper too!