The fifth B.A.S.E Jump Extreme World Championship 2012 is taking place in, or rather off the Gran Hotel Bali in La Cala next weekend - 8th and 9th June.
Base Jumping is an extreme sport where participants jump from fixed objects and use a parachute to break their fall ... as opposed to a body part!
BASE is an acronym that stands for the four categories of fixed objects from which one can jump: Buildings, Antennas, Spans (bridges) and Earth (cliffs).

BASE jumping grew out of skydiving but BASE jumps are made from much lower altitudes and the jump takes place close to the object serving as the jump platform. The main risk is that most BASE jumping venues have very small areas in which to land. To explain the danger a skydiver, after parachute deployment may have a 3 minute parachute ride to the ground. A BASE jump from 500 feet will have a parachute ride of only 10-15 seconds! Adrenaline junkies love the danger involved - there's no room for mistakes ... no kidding there Watson! 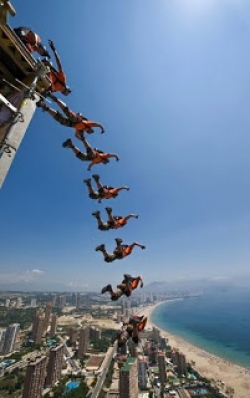 Last years competition had entrants from 15 different countries. There is a panel of judges that award marks for the seconds it takes to open the parachute, the opening angle, the accuracy of landing and the security throughout the jump.

The hotel Bali, located at the La Cala end of Benidorm is 160 metres tall with spectacular views of Benidorm - not that the jumpers will have much time to admire them. If you have the nerve to go and watch them, jumping will take place on both days - Friday 8th and Saturday 9th, between 10am and 1pm  then again between 6pm and 8pm.  There will also be an exhibition on throughout the day where you can find out more information about the sport.

One thing which made me chuckle was when I saw the sponsors list ... among them is Hospital Clinica Benidorm - they'll be on standby with an ambulance no doubt for those that didn't press the open button quickly enough! I can't decide whether I have the bottle to even go and watch let alone contemplate doing something so nutty! Maybe the film crew that are recording for the next series of Benidorm ER at the Hospital will also be there "just in case" !

Photographs provided courtesy of Benidorm Town Hall Press department ... I wasn't actually there myself believe it or not!