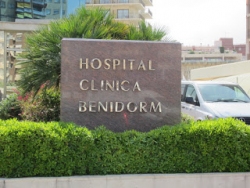 Following the success of Channel 5's documentary "Benidorm ER" which was screened at the beginning of the year, a second series has been commissioned.

Last year the camera's followed unfortunate British holiday makers and ex-pats that ended up in casualty at the private Hospital Clinica Benidorm - one of two private hospitals in the town.

Only those Brits with private travel insurance are taken here - then it is dependent on which hotel you are staying at! Surprised at that statement ? Well it is something I have long suspected, like many others and I had it confirmed when I spoke to various ambulance drivers and hotel reception staff (for another article I am working on). Each hotel in Benidorm has an "agreement" that if an ambulance is needed that they will call one of the two private hospitals for one.
If you do not have private insurance and are reliant on your EHIC (European Health Insurance Card) then you will be taken to the "Hospital Marina Baixa" in Villa Joyosa" , the Social Security hospital - basically an NHS equivalent.

The film crew have been at the hospital since the end of April and will remain there until the beginning of September.
There are 3 teams which work in pairs and when I popped in I managed to catch up and speak with Katie, the assistant producer and Nonuk, the director and camera man.
Nonuk and Katie are permanently stationed at the Emergency department waiting for any ambulances to arrive. However, they don't rush up with their camera's when they see the doors of the ambulance opening!
Once the patient is stabilized Nonuk will then approach them and their relatives( if they can hear that they are English speaking) and ask whether they would like to take part in the documentary.
They have had all sorts in as you can imagine ... and being Stag & Hen season there is a fair spattering of them too!

Another camera crew were upstairs following cases that have already been admitted and will document their progress.
Last year a team followed expat resident and Benidorm entertainer Karen Ravenscroft - otherwise known as Kinky Karen with an ongoing back problem that she was experiencing.

They are once again following the staff around the hospital and have already filmed expat receptionist Maureen Santana - in the last series we saw her busy manning the telephone switchboard.
Maureen has been here for many many years and is married to a local Spanish businessman so totally bi-lingual, which is a necessity in the job she does.

So if you are planning on a trip to the hospital make sure you have your lippy on girls ... you never know, you may be the next television star