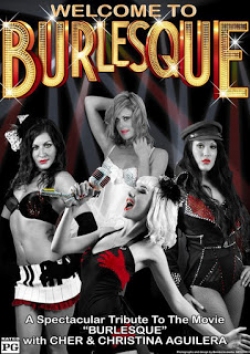 With the bars brimming over every night in the centre of Benidorm you are spoilt for choice as to where to head. Many of the Stag & Hen parties head to the big themed bars which offer round the clock entertainment in the evenings - which is all FREE. If you went into any equivalent place anywhere around the world you would be charged an entrance fee but here in Benidorm there is no charge what so ever. Some of the drink prices go up in the evenings to help fund the entertainment, but they are by no means excessive.

You can go and watch tribute acts/bands in almost every bar - they will have a board outside displaying who is performing and at what time.  You can see anything from Girls Aloud to The Drifters, Meatloaf, Michael Buble,Sticky Vicky... the list is literally endless. You can stay in Benidorm for a week and quite easily see a different line up of acts every evening.

One that seemed very popular with men (obviously) but also with women is the "Burlesque" show which is exclusive to "Broadway" every evening at 10.30pm. -  exclusive means that you can only see it at that particular venue. Since the release of the 2010 film starring Cher and Christina Aguilera the show has attracted a legion of fans and none more so than here in Benidorm. 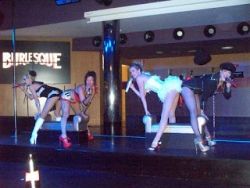 I met up with the girls that make up the Burlesque line up; Jo Lynn (in white feathers), Tasmin (sailor hat), Freya (blonde) and Jo Anne (red shoes) to chat and find out about what their plans are for the future. Firstly I asked them what made them think of putting together a Burlesque show and it was watching Christina Aguilera on the X-Factor final doing the chair routine that planted the seed. It was something totally unique to Benidorm which I thought would work Jo-Lynn told me.

Jo Lynn and Tasmin have both been here for 9 years and met each other soon after arriving in Benidorm. Originally Jo Lynn is from Devon and Tasmin from rural North wales - so totally different to wild and noisy Benidorm! Jo Anne is a Geordie lass and Freya is Russian ... her English is slowly coming along the girls told me.  They are actually in the middle of rehearsals for a new routine which they hope will be ready by the end of June. They are very excited about the new show and have some amazing outfits lined up... one even lights up in certain places I am told! The costumes are all custom made with hundreds of swarovski crystals sewn on by hand. They even found a company "Xtalgod" which crystalized the microphone stand which Jo Lynn is very protective over - not suprizing really when I found out that it cost nearly 1000€! But then it does sparkle nicely.... a girl and her bling eh. 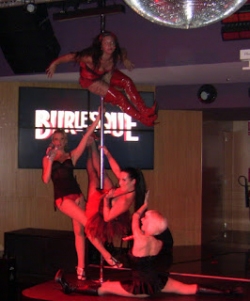 The 45 minute show is very energetic and I asked the girls if they had any special training - Jo Lynn is a trained dancer that worked in the theatre before coming to Benidorm; Tasmin is a qualified fitness instructor; Jo Ann teaches pole dancing (in addition to working at Yorkshire Pride 2) and Freya ... believe it or not is studying for a degree in medical science - there's always one geek in a group isn't there, but probably not one that looks like her!

So have they had any funny or memorable experiences whilst performing - apart from an over enthusiastic audience? One that instantly sprang to mind was an incident with the fire machine. They have 2 machines that are placed either side of the stage which the DJ sets off remotely, with a flame shooting upwards. During one performance Jo Anne accidentally  knocked it over whilst she was spinning on the pole and the DJ failed to notice before pressing the on button! The flames shot out across the floor and singed someones arm ... fortunately there was no serious damage, just a few burnt hairs but since that night he does a double check that they are upright before hitting the remote!

Two of the girls, Jo Lynn and Tasmin also form part of the Girls Aloud tribute which is on at Rockerfellas straight afterwards, so they rush off from one gig to the next every night! Where they get the energy I don;t know - but I'd like some. They normally finish off by 1am and head straight home - but are still full of energy so rarely get to bed before 3am. That's the life of an "entertainer" here ... its hard work - and all to keep you entertained whilst you sip your drinks.