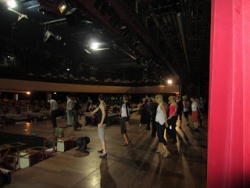 Benidorm Palace is usually on most visitors "to do" list - even locals go on a regular basis, especially when they have visitors. Its a magnificent show incorporating a troup of dancers with the most amazing costumes you are ever likely to see. There are also additional acts on in between which in the past have included acrobats, strongman and illusionists.
Have you ever been curious as to what goes on behind the scenes to put the show together. Well I was lucky enough to find out and spent an afternoon at the Palace last week. The dancers were in final stages of rehearsal's for the new show "Surreal"  which opens on 17th May.

I first met with David Moore - the director and creator of the forth-coming new show. David has years of experience in the world of Las Vegas style production shows and in addition to Benidorm Palace has worked for many world renowned venues such as the Lido in Amsterdam, Casino de Paris and the Royal Palace in Strasbourg. David began his career as a dancer himself and was in fact the principal dancer that opened the Sun City Resort in South Africa for Sol Kerzner. His concept for the new show is based on surreal artists such as Dali/Gaudi and he has interpreted them through dance and scenery injecting much glamour, passion and excitement.


I next got to met Nicci Swift and Andre Kemp who are affectionately  known as "The Feather Pluckers" - these two gentlemen are responsible for all the extravagant head pieces that the dancers wear. They are in Spain for 4 weeks, flying in from South Africa especially for this project -they specialize in feather work hence the name! Nicci told me that they use ostrich feathers for the headpieces which are sourced from Johannesburg in South Africa. To create an extravagant piece they would use 30 feathers per girl - there are 18 ladies in the troupe and I was shocked to learn that one feather costs ap 10 euros... that's some feather bill! The long trains of feathers cost in the region of 40€ per metre and a girl will use 20 metres for one single costume - its makes you realise how expensive the costumes are to make, and this is just one element of it!

Nicci was busy making part of a headpiece when I interrupted - but he was rather glad of a break he said.  He was hunched over applying papier mache to a carefully crafted piece of polystyrene in the shape of a musical instrument. This will eventually be sat on top of one of the headpieces to be worn by the girls.  "Once dried and painted it will look wooden but we have to find ways of making things as light as possible as the girls have to dance with them on" Nicci said - obviously one of the many tricks of the trade.
He told me that at the moment there is a bird flu epidemic sweeping across the ostrich population in South Africa so it may become a lot harder to source the feather - lets hope not, its what makes the costumes so amazing. 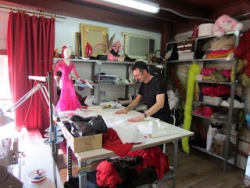 Next stop was meeting Frenchman Manuel Fiabane, who is the costume designer for the production. He is briefed with what is required for each dance and then sets about making a prototype - one was on his work station, a miniature doll size version on which he bases his finished design.
Once he is happy he then has to make the pattern and  then cuts all the fabric personally. At the other end of the room are the machinists who then sew the pieces together... and the machines were humming!

I then went to the stage floor where rehearsals were in full swing and spoke to one of the three choreographers on the show, Lisa-Marie Bertoli - very Italian sounding but a fellow London girl. Lisa-Marie trained as a dancer in musical theatre and has worked for many famous names including Robbie Williams and Kylie. 8 years ago she branched out into choreography and is very excited to be at Benidorm Palace, where she is responsible for all the International dances. The other 2 choreographers - Paloma Aznar and Javier Valverde teach the Spanish and Flamenco routines. The troupe are made up of Spanish, English, Italian, Russian and Ukrainian dancers - 18 ladies and 10 men, with the youngest being 19 and the oldest 37.

This is the hardest time when they are learning a new show - which fortunately is only once a year. They start rehearsing 6 weeks before the show opens, 5 days per week from 2pm till about 8pm. Then after all those hours practicing the new routines they then have to prepare for the evening show 4 nights per week - where they get their energy from I really don't know! I have come to the conclusion that you require an awful lot of stamina to be a dancer. The choreographers were relentless, going over and over steps then again to music. In the last week they practice in their costumes and sometimes have to make slight changes to the routine if the costumes do not allow certain moves or are too restrictive and slow down movements.

I spoke to 2 of the dancers, Kirsty and Katya - who is the dance captain. Kirsty is from Scotland and has been at the Palace for 6 months, so this is the second show she is learning in a very short space of time. I wondered whether they ever forgot any of the moves when on stage "Oh yes they giggled, but you improvise and look at the others then quickly fall back into line". Katya has been dancing here for 5 years now so is use to the routines. She is a trained ballerina and danced in Barcelona for 5 years prior to arriving in Benidorm.

These 6 weeks are obviously very tiring but what is a normal working day like I asked them. They don't need to get to the Palace until an hour before the show starts, so around 9pm when they go and have their hair and make up done then get their first costume on. The show is more or less divided up into 6 parts with 2/3 changes in each. They finish at 1am and normally go straight home, but as they are still so full of energy rarely fall asleep before 3am. They are both lucky as they live in Benidorm but I was shocked when they told me that most of the Spanish dancers live in Alicante and commute every day!

They all have to learn every routine but the Spanish dancers are in the front row of the Spanish and Flamenco numbers and the other dancers are towards the back, then they swap positions for the International routines. The Flamenco was really difficult with a lot of foot stamping going on!

I left feeling exhausted just watching them .... I certainly hold a lot of respect for how dedicated and hard working they all are.
Roll on 17th May - from what I saw its going to be another great show.