Yesterdays BBC breakfast news announced that "First Choice" are going totally All Inclusive. First Choice and Thompson are both part of the larger "TUI" Group - a German multinational travel company and probably one of the worlds largest tourist organisations.
First Choice operate in five Benidorm hotels on an All Inclusive package - Levante Club, Melia, Flamingo Oasis, Flamingo Playa Apartments and Dynastic... the first 3 are virtually next to each other.
I popped by the Flamingo Oasis hotel and chatted to one of the reps there to see if it will have any bearing on the holiday market here. I was told that there will not be any more All Inclusives but rather a re-arrangement, whereby First Choice will offer only the AI package and Thompson all other types eg Bed & Breakfast, Half board etc. At the moment it is rather confusing as both companies offer a mix of both therefore it will make it easier to differentiate for both the staff and customers. 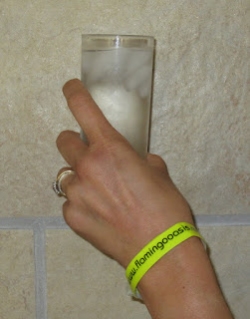 Back in the early days when AI packages first arrived in Benidorm, on arrival you would be given a wristband to wear throughout your duration. This enabled you to basically eat and drink as much as you wanted. However, the hotels soon latched on to the deviousness of some people - they were carefully removing their wristbands at the end of their stay and passing them on to other holidaymakers ... sometimes even selling them! So they started a practice of changing the colour of the band every week to catch people out. Its incredible the lengths some people will go to for a free drink or buffet meal!

Well with the progress of technology they are now given photographic swipe cards, such as the one seen here. This has totally wiped out the "black market" as each card is registered into the hotel computer with an expiry date.
At the Flamingo Oasis, adults are given a purple card and  children (under 18's) are given yellow cards, this is to prevent them from obtaining alcoholic drinks at the bar.... smart move. 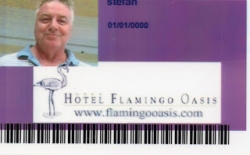 Most of the other All Inclusive hotels also have the swipe card system but the Sol Pelicanos, although not used by First Choice do still issue wrist bands - as seen on the ITV Benidorm series when the hotel was the ficticious "Solana Resort" and Mick could often be seen waving his wristband.

All Inclusive packages include all food, drink and entertainment so that there is no need to leave the resort complex. The wine is  generally flowing at both lunch and dinner - the hotels can afford to believe me. You can go to the wine bodega's and purchase reasonable wine at well under one euro a litre, so you can imagine how much the hotels are paying with the quantities they are purchasing - not a lot! They can therefore afford to be seemingly generous.

But the consequence of the All Inclusive is that it is creating a ghost town around it. They are great in certain isolated locations but in built up resorts such as Benidorm and further down the coast on the Costa del Sol they are killing local businesses. Restaurants cannot complete with the mass purchasing power that the hotel groups can and also once clients are installed in their hotels they are unwilling to "pay again" to eat and drink out.

I can see the attraction of All Inclusives, especially for families who can budget exactly how much they will spend, but there are many drawbacks too. For one, you will be stuck probably eating the same "conveyor style" buffet food all week and not sampling the delights of the local cuisine, such as tapas in Spain. Many local bars and restaurants are therefore forced to shut down due to a lack of trade and ultimately it creates a ghost town.
In a hypothetical situation people will stop coming as there is nothing around except boarded up premises - not an uncommon site in some parts and so in turn bookings go down. As bookings drop tour operators will pull out and then the town will be left destroyed - its not only the bars and restaurants but others that rely on the tourist industry too. If you think that this sounds somewhat far fetched look at what has happened on the typical British High Street since the introduction of the "Out of Town" shopping centres - it has killed the High Street.
So just give it some thought when booking your next holiday ....