The CEO of Jet2.com, Steve Heapy attended the "Invattur" conference in Benidorm yesterday which was organised by Hosbec - the hoteliers association. He was delighted to be able to announce that in the frenzy of bad news for the tourism sector and rise in fares, Jet2.com was increasing its flight capacity between the UK and El Altet by 20% this summer - bringing the total number of direct flights per week to 47.
The airline aims to become the major air link between Alicante and Northern England - a likely prospect  with the ongoing dispute between Aena and Ryanair. The Leeds based tour operator has direct flights from 8 UK destinations; Edinburgh - its newest route, Glasgow, Newcastle,Leeds, Manchester, Blackpool, East Midlands and Belfast equating to a total of 16,832 seats per week.

In addition to the the 20% increase this summer, Heapy also announced the company's intention of increasing the winter schedule by 6% - which is great news for those that come here to avoid the cold harsh British winters! They will maintain 4 weekly flights between Leeds/Bradford and 3 between Manchester and Blackpool. This year the Manchester route will stay active between December 20th and January 6th to facilitate travel over the Christmas and New Year period. 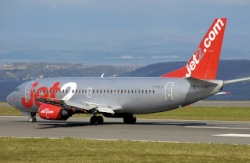 Other seasonal routes will continue until 18th November, enabling British travelers to attend the hugely popular Benidorm fiesta - which this year is scheduled to start on Saturday 10th November and finishing on Wednesday 14th November with as usual a spectacular firework display on the Levante beach. The day after is traditionally the "British Fancy Dress Parade" - which last year was attended by thousands in all manner of "attire"

Director General of Tourism Sebastian Fernandez and  Lola Johnson, area councilor are both delighted with Jet2's positive promotion focusing on tourism between the north of England & Scotland and Benidorm. After Mallorca, Alicante and in particular Benidorm is Jet2's second most important destination.

Jet2 have one of the most generous luggage allowances of airlines flying with 10kg of free hand luggage and 22kg of checked-in costing £14.99 each way. Seat reservations are also cheaper - £3.99 for a standard seat and £7.99 for an extra legroom seat. They also have an in flight meal promotion whereby if an adult pre-books a hot meal which is £8 then kids eat for only 1 pence!