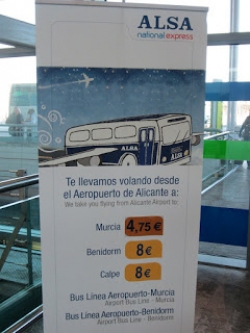 If you are arriving on a package tour then your transfers are generally included. Those hiring a car are also sorted - but what about the remainder?
You can get the very reliable ALSA coach transfer - Alsa is the equivalent of National Express. They run an almost hourly service but it is not a 24 hours and the journey takes aprox 50 minutes.

The first buses departs the airport at 9am and there are two drop off points in Benidorm - the Avd Europa and the bus station - which is a touch further out if you are heading for a hotel so opt for the first stop. The following buses depart from the airport on the hour every hour until 5pm then after that there is one at 7pm, 9pm and the last one is at 11pm. So if for instance you arrive just after 5pm you have rather a long wait! Also, if you arrive "out of hours" then you will need to find an alternative unless you don't mind waiting. The cost is a very reasonable 8€ for a single ticket and you purchase them as you board.

The buses also go up to Calpe for the same fare ... seems strange that there is no extra charge to me! However, it is not a direct route. You go to Benidorm bus station then have to transfer onto another bus with an half hour wait. This bus then goes via Alfaz and Altea and takes just under an hour. If you are not in a hurry its a very pretty scenic route and you get to see the area, but bear in mind that this transfer will take a total of two hours. 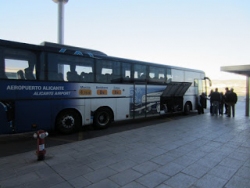 Another alternative is to take an airport shuttle bus such as Travel Republic, Shuttle Direct or Resort Hoppa. These can work out a lot cheaper - sometimes costing as little 5€ BUT it can be a long and arduous journey as they do drops at various hotels and apartments in Benidorm. If you are lucky it may only be 1 or 2 but you may have up to 8 making it a marathon 2-3 hour transfer. 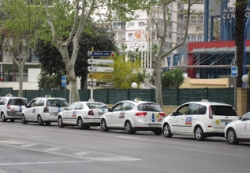 So if neither of those options appeal or fit in with your arrival times the last alternative is a private taxi transfer.  Now a word of advice - the Department of Safety of the City of Elche in collaboration with the  Guardia Civil are cracking down heavily on illegal taxi drivers and touts at Alicante airport (the airport comes under the jurisdiction of Elche). These drivers are not insured for "hire and reward" ie. to transport paying passengers. If you are involved in an accident neither you or the driver will be covered.

There are many people doing airport runs for cash in hand - they meet at the cafes to try and avoid being caught but the airport have number plate recognition camera's. If a particular car is spotted a little too often then they will be visited by the police and investigated and the passengers could also be fined for using an unauthorised method of transport. Taxi's and private transfer companies have to pay taxes and  insurance making them fully legal and accountable - these illegal touts are taking the livelihoods away from honest people and companies as they DO NOT pay.  Please think carefully when booking your taxi - is it worth the risk to perhaps save 20€ by getting into an illegal uninsured car? Two fully legal and reliable companies operating a transfer service between the airport and Benidorm (and further afield) are Costa Blanca Private Transfers and Alicante Private Transfers.