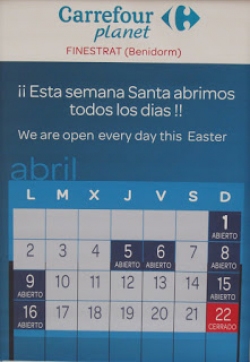 For those arriving to Benidorm for a sunny Easter escape then I'm sorry to be the bearer of bad news. Regardless of when Easter falls it generally rains - and this year is unfortunately no exception. However, at least I can confidently say that no snow is forecast, unlike the UK! We will have the next few days interrupted with showers but temperatures are not due to drop below the 20 degree mark.
Benidorm will be in full swing over the Easter break - all the bars and restaurants will be open including the newly renamed Hypermarket "Carrefour Planet, Finestart" - which to you and me is the Carrefour next to the Marina shopping Centre in Benidorm (although technically it is in Finestrat).
Amazingly they are open all over the holiday period, including Good Friday, Easter Sunday and Easter Monday - although in Spain Monday is not a Bank Holiday unlike in the UK.They are also open the following Sunday then will not do Sunday openings again until the summer months of July, August and September when the resort is full of holiday makers. 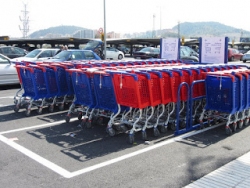 They have just had a massive revamp, spending lots of money giving the store a new modern feel and layout. The outside has all been re-tarmaced - even the shopping trolleys have had a makeover and been replaced with lovely new plastic ones coming in two different sizes .. and look very similar to Tesco ones! The red ones are smaller and shallower and the blue ones are for big family shops! 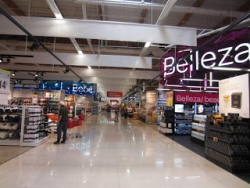 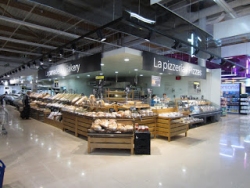 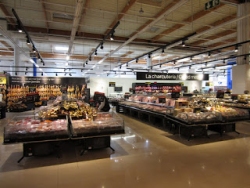 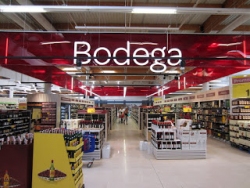 Don't forget to take your own shopping bags, no free ones anymore. Even Iceland are starting to charge now! The petrol station next to the store are at present offering 10% off the pump price on presentation of the club card -  you do not actually receive the cash discount but receive a voucher twice yearly to use in store. Still, with the price of fuel rocketing and costing more or less the same everywhere it makes a nice suprise to receive the voucher enabling you to do a "free shop" later in the year. 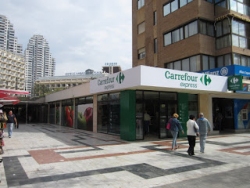 For those without a car or at the Rincon de Loix end you'll be pleased to know that a brand new Carrefour Express has opened on the Avd Mediterraneo. Same prices as the hypermarket but even better opening hours - from 9am until 11pm Monday to Friday. At present they do not open on Sundays but maybe "in season" over the summer months they may.