I met up with Peter, the brains behind the operation to find out what was on the agenda for the weekends partying. "Last year was our first dip in the water in Benidorm and we were delighted with the turnout. This year it will be twice as big and who knows in 5 years time .... look what happened at Porthcawl, a small seaside town on the South coast of Wales!"

I admitted I had never even heard of Porthcawl before and asked why he chose it as I am sure that I wasn't alone .... "It was a spoof originally made for radio and just went barmy" - had he known how successful it would become he would possibly have picked somewhere more prominent. Having said that its put Porthcawl on the map and done wonders for local trade over the 3 days - but its like a tornado hitting the town every year.

So onto Benidorm ... next years dates have already been decided, which are 12-14th April 2013. So whats in stall for Elvis fans this weekend - put it this way, you'll need a holiday afterwards to recover!
Things kick off on Friday at 2pm in the Melia Hotel - where registration takes place. There will be a 2 hour preview and welcome party by the hotel poolside then the partying moves onto 2 local bars in the Rincon from 4.30pm until 8.30pm which will host an Irish and a German Elvis tribute act. Then its back to the Melia at 10pm for the "Big Vegas Show" until 1am THEN if you still have an energy left there are the Aftershow Parties which will carry on until 4am! And that's only the first day.... 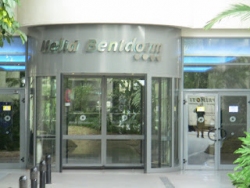 Saturday morning you can catch up on some much needed sleep then things start again at 1pm with an Elvis themed family fortunes game. 2pm by the Melia poolside is "Elvis at The Movies" then at 5pm the finals of a Spanish Elvis competition. The official Elvis Presley fan club of Spain have been running a competition over the last 6 months to find the best Spanish Elvis. It is now down to the last 6 and the final is happening here... the winner will be headlining at the Porthcawl festival. Imagine, performing in front of 30,000 fans - wow, that's an honour and achievement for the winner and certainly something that he'll never forget!

Sunday 1pm is Elvis quiz time at The Melia followed by an Elvis Gospel show.
Dave Rowlands, DJ on a local British radio station in Benidorm will be comparing in Spanish and English over the course of the weekend - he'll certainly be needed with the decent of all the Spanish fans on Saturday in particular!

All events be at closed venues, meaning access is only available to ticket holders. The general public will not be admitted. Last year you could only buy a ticket for the entire event but this year Peter told me they have made a slight change. Last year many people could only attend for 1 day so they have bowed to demand and this year bought out daily tickets alongside the 3 day pass. These are available to purchase from the Round Town Travel shops and also at the Elvis registration desk of the Melia hotel on the day for 30€... but be warned that only a limited amount of 1 day tickets were printed so if you want one its best not to leave it till the last moment and be disappointed.

After the hectic 3 days I assumed that Peter would be kicking off his "Blue Suede Shoes" and relaxing ... you must be joking. He has written 2 books - his first was a biography of Richard Martin and the second about the Prisoner of War escape from Bridge End. He is now writing a film script based on his second book - which is a true life factual event of how 3 prisoners escaped through a tunnel that they dug although this was and is denied by the government. Another on going project is a radio documentary for BBC Wales and the Welsh involvement in the Spanish Civil War. There is a strong link between Wales and Spain ... 1500 Welsh miners helped the Asturias miners generations ago - and why you will find Welsh descendants living in Asturias and Galicia!  Maybe why Peter has Spanish blood running through his veins and subconsciously chosen Benidorm !