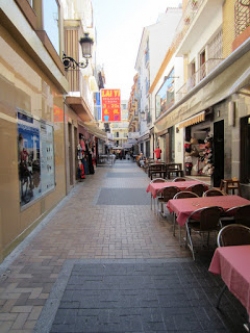 The Department of Tourism in Benidorm is hosting the second annual "Tapas and Pinchos" competition commencing on Monday 26th March and finishing on Sunday 1st April.
An amazing 37 establishments are taking part which are all located in the Old Town - 14 of which can be found down Calle Santo Domingo - famously known as Tapas Alley. Each of the participating competitors has a "Concurso Tapa y Pincho" poster in its window.

The idea is for people to sample a vast range of traditional, as well as innovative Spanish tapas. The price per portion is only 2 euros whichever establishment you go into. You are then invited to vote for your favorite via sms text - 626 357 507 with the name of the establishment (so don't have too many glasses of vino before texting). There are 3 categories - the most avant-guard; the most traditional - both of these are chosen by a panel but the third category is chosen by the public. There is no monitory prize but just a plaque and the prestige of being a winner.... and so hopefully lots of extra business! 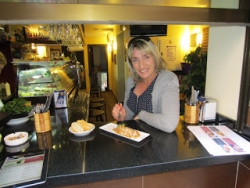 I popped down to Tapas Alley and spoke to Christine, owner of L'Alberca and she was very excited about the competition. "It is all very good publicity for the Old Town and allows the tourists to savor a taste of what Spain has to offer" she said.
The tapas entry which I sampled was truly amazing .... it was fillet of pork flambe in a cream and cognac sauce. A few of those and I would have been over the drink drive limit I think. This was served with some bread to mop up the sauce. As my parking ticket was running out I had to make a dash for it and get there before the traffic warden so unfortunately didn't get the chance to sample any more. 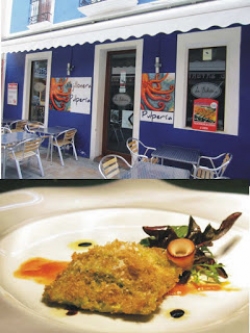 "La Boheme" is offering Cha-cha-cha de pulpo. This is a ravioli of squid and avocado which is cooked then coated and fried and served with a spicy sauce. 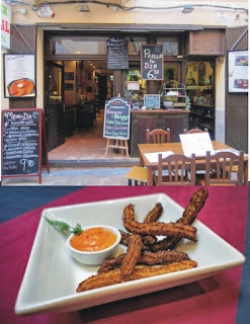 "Taberna Tamboril" are offering Churros de manitas which are fritters of pork. potato, leek and carrot served with a pepper and cream sauce. 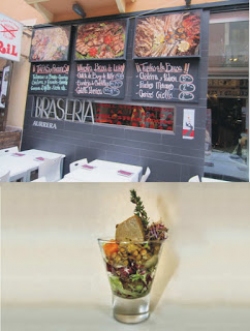 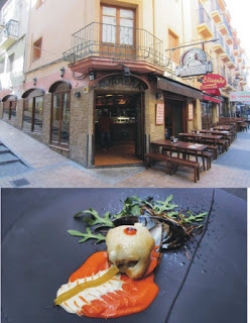 "Bodegon Aurrara" has Tigre de alcachofa rella which is artichoke heart with gratinated mussels and an ali oli dressing. 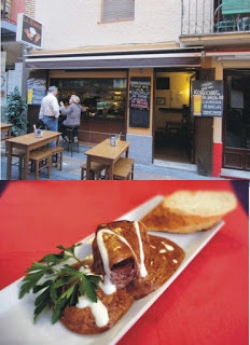 "L'Alberca" has the one I sampled - Solomillo de cerdo flambeado al cognac - fillet of pork flambe with a cream and cognac sauce. Truly yum but I mustn't bias you!
There are another 32 for you to try and savor ... this is just a taster  and I think that you'll need the entire week to get through them all!
In addition, on the 29th March there is also a day of "wine culture" for you to enjoy. Salud!