Despite recent reports that passenger numbers flying into El Altet Alicante airport have fallen over the last two months, business in Benidorm appeared brisk and busy over the weekend.
Walking down the Avd Mediterraneo you would be forgiven for believing the reports but turn onto the Calle Gerona and surrounding streets and it was positively heaving.

Calle Gerona runs parallel to the Avd Mediterraneo and following a successful trial last summer where the last part was pedestrianised, the mayor is wanting to extend this to the entire street. It is an ambitious project and in the current financial climate probably unlikely to happen soon. 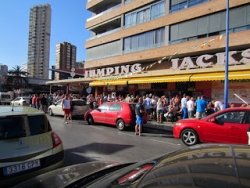 The wonderfully warm Saturday afternoon obviously helped but drinkers were literally spilling onto the street. There were plenty of stag parties among the St Patrick Day revelers and rugby fans, waiting for kick off of the six nations final. But it was all lighthearted and no sign of any trouble - just holiday makers having fun and enjoying themselves.
And the bar owners certainly weren't complaining after the quiet Winter season - I bet that they are just hoping the good weather continues.

Even taking a walk along the promenade on the Levante beach front was an obstacle course. The hugely popular Tiki Beach bar and Daytona Rock bar was attracting many punters, especially with the live music playing. 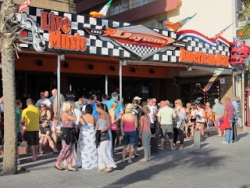 The locals stop mystified at the crowds spilling out of these places but you can see them tapping their feet to the music after a few moments. The older Spanish take walks along the promenade well wrapped up and dressed in all their finery looking aghast at what they deem "semi naked" people - to them its still fairly chilly at 20 degrees but to the Brits its positively Summer like. Shorts, flip flops and t-shirts are worn by everyone here as you can see by all the pictures!
If you are heading out here for Easter then everything will be in full swing - the bar staff are getting their practice in now. 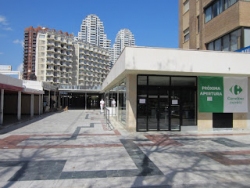 And for those of you that are staying near the Avd Mediterraneo at the Rincon end you will be pleased to know that a Carrefour Express is being opened - especially handy if you are not at an all inclusive hotel. The planned opening is for 28th March and it is located next to the walkway where the joke shop and Cumberland bar are - almost opposite the Hotel Ambassador on Calle Gerona.
It will be similar to a Tesco Express in the UK so you don't need to worry about bringing heavy bottles of shampoo and shower gels which will weigh down your luggage - just buy it when you get here instead.