Today saw the opening of a brand new Primark store within the Gran Via shopping centre in Alicante. Police were even on hand to direct traffic on the roads leading to the car park underneath, which is free of charge.
The opening was due at 12 noon but true to Spanish timekeeping was late! The Alicante fiesta queen was there to cut the ribbon and officially open the store with management from the Primark head office.
The store is located on two floors and crowds were gathered at both doors, ready to storm in on opening. Security staff had erected cordoned areas to keep the crowds in an orderly queue but once the doors went up it was a free for all!
Its hard to believe the newspaper headlines that there is a recession on in Spain and people are struggling to survive - there were certainly thousands here today.
Staff were at the doors handing out balloons to the children and baskets to the shoppers. It was truly a retailers dream - aisles knee deep with customers. I even spotted the managers from Carrefour next door have a nose.
The store has 3264 sq mt of retail space selling ladies, men's & children's wear with a home section  and employs 176 staff. I must say that listening to the crowds they all appeared to be Spanish - maybe the British ex-pats will be in on Saturday.
The store is open from 10am until 10pm Monday to Saturday. They haven't yet grasped Sunday opening here but maybe one day. 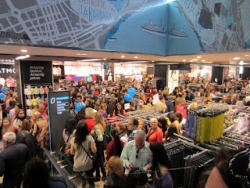 The Gran Via shopping centre is easy to find and only a 30 minute drive from Benidorm. If you are heading from Benidorm on the AP7 then take the first exit after the long tunnel following the tolls - exit 6 signposted Alicante norte/Avd Denia. Follow direction for "centro" and keep to the right hand lane - do not go through the underpass. Turn right at the Renault car showroom and head past Media Mart/Leyroy Merlin DIY store and at the next roundabout turn left. The shopping centre is on the left just off the roundabout. It is ideal to pop into on an airport run collecting or dropping off passengers.