Yesterday saw the first day of trading at the new location for the La Nucia rastro. Previously the rastro had been located on the road where the Centro de Salud is - a built up residential area which proved somewhat of a nuisance to neighbours and the health centre. But the rastro has now "come home" to where it first started 30 years ago - on the "L'Alberca Industrial estate". It was actually started by Goran Beer, a Swedish man who then owned the "Bar Go Kart" on the estate, which incidentally is still there. His remembers back in the 80's there was nothing like it here in Spain but in his native Sweden, rastro's and flee markets were all the rage - so he decided to start one up!
He was presented with a specially engraved momento by the Mayor, Bernabe Cano who also thanked Goran for his brilliant idea, which has resulted in the rastro as it is today. The local television station was there as well as local journalists to record this momentous occasion. 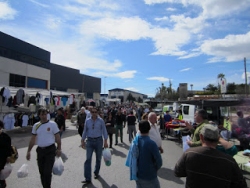 Turnout was exceptional, helped by the glorious weather as thousands of visitors flocked to the new rastro with hundreds of stall holders selling an array of goods. There is ample parking and signage to direct you, toilet facilities and the Policia Local were out patrolling in good numbers. If you are driving then head for the roundabout where Lidl and Aldi are located and there is a huge sign directing you to the free parking areas - there is also an ALSA bus that goes from Benidorm which you can catch and goes every 2 hours ... the 10am one would be ideal. If you are an avid bargain hunter then the Polop rastro is just up the road so you can easily spend an entire morning here.