Perils of Levante beach in Benidorm 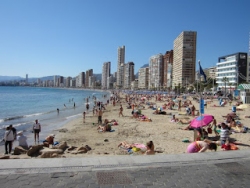 Levante beach is one of the reasons why many people choose to come to Benidorm on their holidays - understandable with its miles of golden sand. In the busy Summer months the beach is packed with holiday makers - sometimes its a struggle to find a square metre of sand to place your towel!  Its shallow waters and gentle slope into the sea make it a favourite with families but a word of caution.

Just 20 inches beyond the shore line lies a mile long stretch of rock mass hidden beneath the water. It is known locally as "El llosar" - the rock. Every summer hundreds of swimmers are injured resulting in cuts, grazes and twisted ankles as their foot slips into a crevice.

The Town Hall are aware of the dangers and have tried on numerous occasions to remedy the situation. In 1994 they moved hundreds of metres of sand from the Poniente beach and covered the rocks but obviously over time the sand washed away. Then in 2008 they tried to break up the rock using a mechanical  pick hammer but after 3 days the locals were up in arms over the constant noise and environmental groups where raising concerns over the damage to the ecosystem.
After various consultations the Councillor for Environment & Beaches Pepe Marcet has announced that the Benidorm City Council will run an "information campaign to warn swimmers of the hidden dangers". Basically that means they will put some signs up along the beach ... job done!

If you do happen to need first aid treatment then head to the yellow & white stripped hut which is located near to the "Heartbreak rock cafe/bar". It is manned all year round by staff who are contracted by the council - not volunteers such as Cruz Rojo. Out of season (Oct - April) it is open from 10am till 5pm and in peak Summer months from 9am until 8pm. There is a yellow ambulance parked just off the promenade for any emergencies which cannot be dealt with on sight.

The safest alternative is pop along to one of the many Chinese shops in town and purchase a pair of rubber soled swimming shoes which will protect your feet from scrapes and grazes and also stop you being bitten if you stand on something. They cost anything between 5 -10€ and certainly worth investing in rather than the alternative - spending hours at casualty.