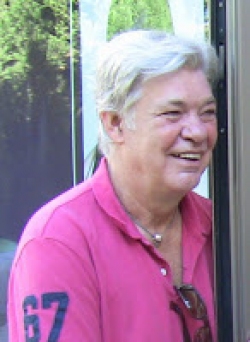 According to Matthew Kelly who was on ITV's lunch time show "Loose Women" yesterday, the new series is starting on Friday 24th Febuary. Matthew had a cameo role and his episode will be on air the following week - 2nd March. Over the past 4 series, many celebs and stars have had cameo appearances such as Cilla Black, Sue Pollard, Wendy Richards and Denise Welch - who's husband Tim Healy is a regular cast member. Rumors were rife that Jackie Collins would appear but it never materialized. However, Kate O'Mara of "The Brothers" a BBC series of the 70's and more lately appearing in "Absolutely Fabulous"as Jackie, the long lost sister of Patsy (played by Joanna Lumley) DID make her debut in this latest series.
Steve Pemberton, who plays Mick Garvey, wrote three of the episodes (No 3, 5 & 6) whilst the remaining ones where written as usual by the incredibly talented Derren Litten.  Steve's new series of "Whitechapel" started last night on ITV (9pm UK) in which he plays consultant historian Buchan - the total opposite to his Benidorm character as the lazy, uncouth and sarcastic patriach of the Garvey clan.

The Town Hall were delighted that Tiger Aspects came back to film a 5th series - it puts Benidorm on the map and holiday bookings go through the roof once the series is broadcast. Everyone wants to see where the scenes were filmed of their favorite television series.

The pool at Sol Pelicanos hotel is the ficticious Solana resort and Morgans Tavern is Neptunes night club. The indoor hotel scenes are filmed at what the locals all call "the Pink house" - just past Benidorm Palace. Many holiday makers specifically want to stay at the Sol Pelicanos hotel and have photos taken at the same pool bar to show their friends back home... the staff are use to it after so many years.

Its great publicity for Benidorm and the Town Hall are very accommodating when it comes to closing streets to traffic for filming. When they shoot live scenes at the poolside, the police in the street behind the hotel stop the traffic for the duration so that no traffic noise is picked up. They run a few test shots first until they are happy then the walkie talkies come into force with the crew and local police liasing to stop the traffic at the exact moment of shooting - which incidentally only lasts for a few minutes at a time.

They have also filmed at many of the towns tourist attractions such as Terra Mitica, Terra Natura, Font's D'Algar and in the Christmas special featured Benidorm Palace.
Lets hope that they'll be back again next year for another series - it certainly increases trade for lots of local businesses which can only be a good thing in these economically dire times.