6th January in Spain - a VERY important day for 2 reasons!

I hope that you all had a wonderful Xmas and New Year and made some New Year resolutions.... which you haven't broken - yet!

Well back in the UK the sales started on Boxing Day, 26th where some mad shoppers queued all night to bag a bargain. Here in Spain the sales or "rebajas" do not start until 7th January - the day after "Three Kings or Epiphany" or "Dia de los Reyes Magos" in Spanish - which is on January 6th and falls on Friday this year. In fact, it is probably regarded as the most important festival in Spain.

On the Eve of Epiphany, the 5th January there are parades in most Spanish towns and cities to symbolise the arrival of the Three Wise Men - Melchior, Casper and Balthazar to the city where Jesus was born. It is a major event especially for the children when massive floats pass with the Three Kings waving, camels or horses join the street parades and sweets are thrown into the crowds.

Before going to bed that night children will leave out milk and biscuits for the Three Kings and their best pair of shoes to be filled with presents! Then on the 6th the children awake to see how good they have been by the amount of presents left! If they have been naughty they are left coal ..... you may have seen bags made of sack cloth with the words "carbon" on them in supermarkets such as Mercadona. The "coal" is actually made of sugar now but in the "olden days" it really was a lump of coal.

In Carrefour there were queues of customers waiting to wrap presents with the free gift wrap provided and the car park outside "Jugetilandia" toy shop next to Iceland in Benidorm was totally full - cars were double parked and you had to push to get into the store! 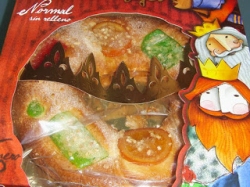 The family gathers for breakfast on the 6th and it is traditional to enjoy a "Roscon" .... a sugar frosted teabread decorated with glace cherries which is available in all the supermarkets and bakery's. Within the roscon is hidden a novelty such as a porcelain figure and whoever finds it in their portion will have good luck for the entire year.... it is a bit like a coin being hidden in the Xmas pudding.  ALL shops will be closed on Friday so make sure you have everything you need!

The other exciting thing which happens on 6th January is the "El Nino" lottery. After the excitement of the "El Gordo" on 22nd December you would think that the Spanish would be after a quiet time but it all kicks off again 2 weeks later with the deceptively named El Nino - meaning "The Little One". The draw takes place at Noon in the "Teatro Falla de Cadiz" and although not as huge as the El Gordo, which is the worlds biggest lottery it still has a staggering total amount of 840 million euros in prizes to be won!