Specsavers in Benidorm fundraise for Emaus.

A brand new branch of Specsavers has opened in Benidorm, on the Calle Gambo - the pedestrianised street in the Old Town and tomorrow they are holding a fun day raising money for Emaus. 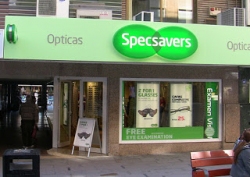 I popped by today and spoke to Phillip Morgan, who together with Jorge Martinez are joint owners of the store.  Phillip is the retail director with much experience having worked for Specsavers in the UK for 12 years whilst Jorge is the optometrist, having had his own practice for the past 5 years in the Benidorm area. The 2 joined forces and are delighted with the outcome.
Originally from Bedfordshire, Phillip moved to Spain 4 years ago to retire (very early retirement I might add) which was rather short lived when his wife became pregnant with triplets.... they are now 18 months old! Specsavers approached Phillip knowing that he lived in the area as they were looking to open a franchise and needed someone with his sort of experience. The chain had been looking for over 3 years to find a suitable location in the town and certainly found it here on one of the busiest streets. Specsavers is already an established name in the UK but I was suprised to learn that they are also well known in the Scandanavian countries and as such have many Norwegian and Dutch customers coming in. 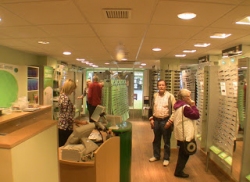 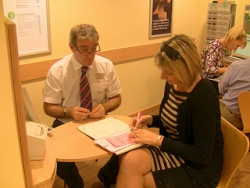 With children close to his heart, for obvious reasons he wanted to get involved with some charity work that benefits children and so together with his co-partner Jorge decided upon Emaus. The organisation run 5 homes in the area and are always hugely appreciative of any efforts to help raise both funds and awareness for the charity. So tomorrow, Thursday 1st December they will be hosting a fun-day with lots of entertainers for the children and activities throughout the day, starting at about lunchtime. This is the first of many such events they are planning throughout the year ... they had proposed to erect a bouncy castle and cook a giant paella outside but the Town Hall didn't grant them permission on this occasion. Next time they hope that with better communication with the relevant department it will be an even grander event.