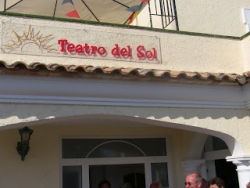 Yesterday, Wednesday 7th September saw the inauguration of a brand new Performing Arts Centre in Bello Horizonte. The opening was officiated by the Deputy Mayor of La Nucia, Councillor of Culture and Foreign Residents Bart Gommans and Director of the Auditorium in La Nucia Frances Simpere. There was a huge turnout of well wishers, friends, business collegues and choir members ensuring that the afternoon was a success - and all were welcomed with a glass of champagne.
Rob Barendsma, Director of the Centre has a long and successful track record directing many productions which have been performed at the Auditorium in La Nucia, inparticular the "Friday Choir" which has over 120 singers of various nationalities.

Rob's background is in performing arts. He has a music degree which he attained in Holland then went on to study for a dance and acting degree in Germany. Fed up with life in Holland he took a year out and went travelling around Europe, finally settling on Spain to be his new home. His first project here was with a group of amatuers some 8 years ago which he found challenging but extremely rewarding. He then set up the Friday Choir - so named because rehersals were every Friday! However, rehersals will now be on Thursdays as the pianist accompanying the choir has other commitments ... but they don't plan on re-naming. Rob welcomes new members of any ability to the rehersals every Thursday afternoon starting at 15.30pm. The next performance they are working towards is a Xmas Concert on 11th December at the Auditorium in La Nucia accompanied by the La Nucia Orchestra. Going by the past concerts it is bound be a huge success.
Another project that Rob is working on, together with Joanne Venet - director of DramaKidz is a production of the "Sound of Music" which will be on at the Auditorium on 27th, 28th & 29th January 2012. They held auditions recently for the cast and were amazed at the quality of talent. Infact, the Von Trapp family are actually a real family - well almost. The Captain, Maria and 3 of the children are a real life family! Rob and Joanne were stunned when the heard them singing - and the Captain can actually play a guitar too - doesn't get any better really. They are still looking for more nuns so if any budding actresses are about contact Joanne on 679 646 145. Joanne teaches drama to children and adults at Drama Kidz and being an actress herself can certainly give you some useful advice.

Rob is also starting "The Glee Club"  to teach singing and dancing to all. Groups will be divided into juniors, for age 10-14 and then 15 & overs and classes will be held at the new Teatro del Sol on Friday evenings. For further information contact Rob on 616 703 669 or email him: This email address is being protected from spambots. You need JavaScript enabled to view it.