The Duchess of Benidorm

The second business that ITV Daybreak's Steve Hargrave (Entertinment  Correspondent) visited was Philip from the Casa Don Juan - a boutique hotel located in the very heart of the Old Town of Benidorm.

Phil is better known as "The Dutchess" and spent an evening showing Steve the "nightlife" in the town which was broadcast on Tuesday 2nd August - you can still catch it on YouTube. I'm sure that they will both count the bucking bronco experience as memorable and probably never to be repeated! Well the crowds watching certainly enjoyed it ....

I popped into the Casa Don Juan - which can be found just round the corner, literally from Tapas Alley. The Old Town has a thriving Gay community and this October (21st -23rd) Benidorm will be hosting its very first "Gay Pride extravaganza" - raising money for 3 Gay Spanish charities. 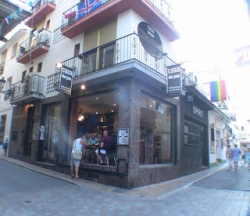 Philip came to Benidorm just over 14 years ago - relocating from Wandsworth in London (but is originally from Leeds). He came to help out friends that ran the Don Juan and worked there part time over that Summer. Their circumstances changed and they decided to move back to the UK and offered Phil first refusal. So in 2000 Phil took over and hasn't looked back since.

He left the name for 2 reasons - firstly it was already an established brand and secondly to rename would involve ALOT of paperwork and alterations to the property. The licence that existed couldn't be revoked but in order to change the name he would have had to apply as a new business which would have entailed installing numerous disabled facilities which are now compulsory- and anyone who knows the Old Town will be able to appreciate that this is easier said than done.

Phil now employs 2 full time and 2 part time staff to help run the thriving hotel. There are 7 en-suite rooms and a further 2 one bed apartments - full details can be found at www.casadonjuan.eu


Phil has been with his Spanish partner Cristobel for 17 years.... and they are planning to get married in the not too distant future (paperwork allowing and being Spain we all know that could mean a rather long wait!) They met at a nighclub in Ibiza where Cristobel initially thought Phil was Swedish ! Perhaps his Yorkshire accent sounded Scandinavian through the deafening retro music.... that'll be a first I'd say !

Phil becomes "The Dutchess" most nights at the hotel where he hosts "Play Your Cards Right" ..... but with a twist ! Its a hilarious evening - or should I say morning as it doesn't get started until 1am. If you fancy a laugh head to the Old Town for some Tapas then saunter up to the Casa Don Juan and it'll certainly be a night to remember.