Audition for extras for Benidorm 5 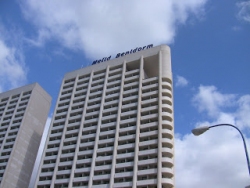 This morning there was a hum of excitement at the Melia Hotel in Benidorm. The "Mediterranea Audicion" agency, based in Alicante, were holding castings to recruit extra's for the upcoming 5th ITV comedy series "Benidorm". The casting time was from 10am but the first people in the queue- Sue Ellans and Peggy & Stan Crockett, arrived at 9am to ensure that they did not miss it!
Elena Sanchez from the Agency was delighted with the turnout of both Ex-Pat and Spanish residents. They were expecting over a 1000 to attend. Nicky Chapman was on hand to co-ordinate between the extra's and casting agency and answer any queries.

All prospective extra's had to have NIE and social security number before they were allowed to apply - so any visitors or tourists were not eligible. The forms this year were in both English and Spanish - something that was missing at last years castings when the form was only printed in Spanish by the previous casting agency.

Pere Ayullo from the Spanish Production company "Filming Spain" have been contracted by Tiger Aspect to run things at this end - and was on hand overseeing the morning.
The series has also stirred interest in the Spanish media as "Canal Nou" came with a camera man and reporter to interview Pere on the upcoming filming in Benidorm.
Reporters from other local publications, including Round Town Times were also present.

Filming will commence on 29th August and run until 2nd December with long 12 hour days lasting from 7am until 7pm - but this did not seem to put off any of the prospective candidates, as the stood in the queue patiently waiting for their turn. Each person had to fill out a form with their personal details and then wait to have a photo taken.... I left at 11.30  and the queue was still nearly at the entrance !