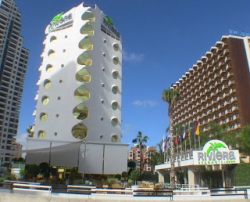 After a complete renovation, the "Riviera Beach Hotel" has just re-opened its door to customers as an adult only hotel - no under 16's. What a brilliant idea ... 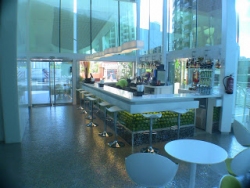 It is located in the heart of the Benidorm entertainment district on the Avd. Derramador ( the road leading from the Sunday market to the Indoor market). The Sol Pelicanos and Morgan's Tavern, aka Neptunes Bar, both featured in the ITV hit series "Benidorm" are both within 100 metres of the Riviera. The re-fit is visually stunning and very contemporary - white and apple green are the colour theme giving the place a relaxed and throughly modern feel, meriting it the 4 stars which it has been awarded.
There is an outside bar to the front of the hotel where you can relax and enjoy a drink whilst watching the world go by. 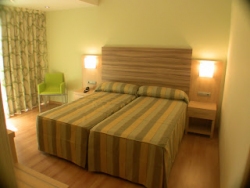 All the bedrooms are twin bedded - with the exception of one suite, which has a double.... possibly a mistake but the only one I can see. The rooms are all beautifully decorated with balconies and  luxurious en-suite bathroom.
A WiFi connection is included in each room - so bring your ipad or laptop - there's no extra daily connection charge.
There is a fully equipped gym on the lower floor for the use of residents. The pool area is not large but as there are no children about dive bombing and splashing, it is adequate and tranquil. 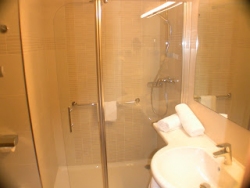 The cost is dependent on season but for peak holiday time,the month of August for instance the price is 47.60€ per person per night which includes FULL board, making a 7 night stay for a couple 666.40€ if booked directly with the hotel. Drinks are NOT included... it is not an all inclusive.
I met a Thomas Cook tour guide in the lobby and he told me that over-spills from the Marina Hotel were being transferred to the Riviera - usually when this happened there would have been many complaints but in this case not a squeek! 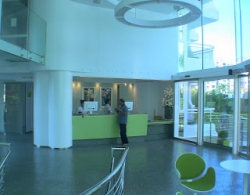 I asked if I could have a look around and take photos and they were very accomodating - not so much that they offered me a free room for the night though!
To contact the hotel direct the number is: 965 854  362. Thomas Cook certainly operate from this hotel but it was probably too late for other operators to include it in their brochures.
I wonder whether this "adult only" concept will latch onto the airlines too with an adult only flight! Maybe I'll drop Mr O'Leary or Stellios a note ....