Building in the Old Town- Benidorm 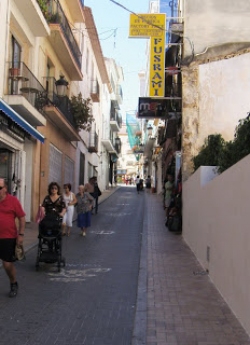 The Old Town is located between the Levante and Poniente beaches and a far cry from the "British Square" and what people associate when they hear the word "Benidorm". Its not all "2 for 1 Happy Hour" and "All Day Breakfast" - although if that's what you want there is plenty to be had.
The Old Town is like a step back in time - full of narrow cobbled streets adorned with white-washed houses and an abundance of tapas bars, boutiques and restaurants on nearly every corner. The climb up to the top is worth it when you see the wonderful views of the two bays and the beautiful blue domed San Jaime church perched at the top.
But have you every stopped to wonder how, with the winding narrow streets and rows of buildings on either side they renovate or rebuild any of the crumbling structures? Let me enlighten you ..... they call in the Local Police to assist ! 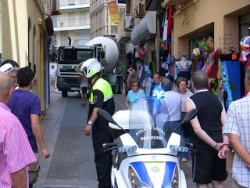 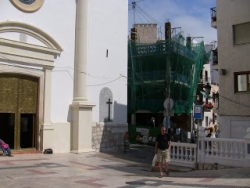 Wondering around the Old Town one morning I was drawn to the sound of a police whistle being blown frantically and much shouting. As I turned the corner there was a Policia Local officer trying to guide a massive 8 cu metre capacity concrete transporter around the winding streets! Boy do you have to be a good driver and have alot of nerve - especially as in most places there are literally only centimeters to spare between the overhanging balconies and overhead telephone and electricity cables. The locals all came out of shops and houses and joined in shouting instructions to the sweating driver - back abit, foward, to the right, no left, watch the shop sign etc.
I walked up to the top and there, next to San Jaime church was the recipient of this particular load - the beginnings of what will probably be a restaurant or shop at street level and housing above. But my goodness, this process had obviously been done many times already and still had many trips to endure till completion! Normally I would have thought that delivering a mixer load of cement would take perhaps a couple of hours .... here its an all day job - and in addition there was the pump that accompanied the lorry! 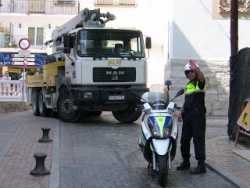 This monstrosity also had to be guided down the same narrow winding streets after the cement lorry - then the entire process repeated again the following day! No wonder the driver was grey ...... well it certainly makes a change from the normal building sites he delivers to.
It was certainly an unusual site - and a change for the officer from the morning school traffic patrol! 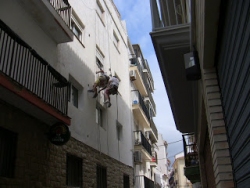 ..... and if you thought painting your front was a doddle then check out these two - not a job if you're scarred of heights or need two hands to hang on. These chaps were suspended on ropes - probably ab-sailors in their spare time.