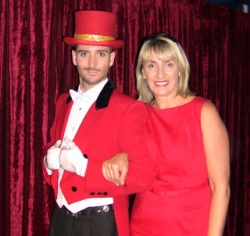 Well the circus is well and truely in town! You will find "The Big Top" behind Benidorm Palace - a well known landmark in the town. It has been a permanent fixture there for the last 3 years and can accomodate eight hundred and fifty people - they are totally wheelchair friendly with the installation of ramps for easy access to the ringside and have heating and air conditioning to ensure you have a comfortable evening.

Not having been to a circus since I was a child I wondered whether it would have the same entertainment level for an adult ...WOW - it was absolutley mind blowing and kept me transfixed for the entire 2 hours. I met up with the Ringmaster, David Climent before the show to have a chat. 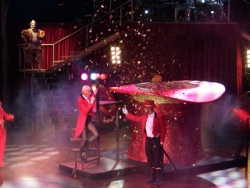 The first thing he wanted to get across was that there are NO animals in any of the performances - the show is based around a dramatic mix of traditional circus acts but also incorporates highly skilled performers. In total there are 45 dancers & performers  who train 3 times a week for the weekly show which is on every SATURDAY evening starting at 18.30pm.

As well as being Ringmaster David performs in the trampoline act which he tells me took aprox 1 month to perfect. It is a variation on the traditional clown act and will have you both laughing and in awe at the skill required - I certainly don't remember being able to do what he did with a skipping rope !!!! 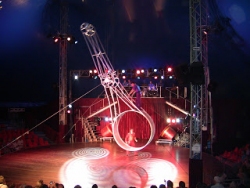 Most of the acts are performers from the Benidorm Palace so you can imagine the quality is first class and gives you a taster if you haven't been to the Palace - you will certainly want to after an evening at The Circus! There is a live band - on a mezanine above the ringside,  playing throughout the show which adds to the atmosphere - probably a first for any circus.

The show lasts for 2 hours with a quick 10 minute break half way through giving you time to pop to the bar for a drink or stock up on a circus favourite ... popcorn! There are no seat reservations so get there early to nab the best ringside seats - people were already arriving at 6pm. There is ample free parking outside so not an issue trying to find a space - as can be the case in Benidorm. 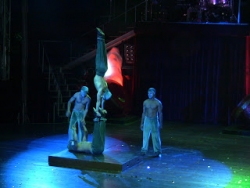 The show changes yearly - the current one is called "Clowns" and 3 months of rehersals will commence from October David told me for the new show to be ready in the New Year. Due to the huge success and popularity of the Circus they are looking to franchise the show in Madrid and other major cities across Spain... so many more people can enjoy the experience. 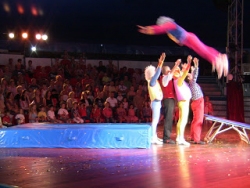