If you are fed up of pie & chips and fancy a taste of real Spain then head to "Tapas Alley" in the Old Town. It is so named because the entire street is made up of tapas bars! The biggest and busiest is  "La Cava Aragonesa" which has a constant stream of visitors - both locals and tourists.

The word "tapas" is derived from the Spanish verb taper - meaning "to cover". According to legend, the tapas tradition began when King Alfonso X recovered from an illness by drinking wine with small dishes between meals. After regaining his health he ordered that taverns would not be allowed to serve wine unless it was accompanied by a small snack or "tapa". The original tapas were slices of bread or meat which sherry drinkers in Andalucian taverns used to cover their glasses between sips to prevent fruit flies from hoovering over the sweet sherry.The meat used was normally ham or chorizo - which being very salty encouraged more drinking .... even back then the proprietors weren't daft - and so began the tradition of serving a varirty of snacks which in turn increased alcohol sales!

In Spain, dinner is usually served between 9pm and 11pm .... sometimes as late as midnight - especially in the hot summer months and lunch would have been between 1pm and 3pm therefore a long gap hence the popularity of tapas as a means of filling the gap between meals.

Tapas has evolved over the years and varies depending on region. At "La Cava Aragonesa" the selection is vast to say the least. Most are so beautifully presented that they look like little works of art. Some are served cold such as salmon, lettuce & crab whilst others are heated such as aubergine, ham & cheese or loin of pork; cheese & fried onion which I indulged in! Other varieties included spicy chorizo with yellow pepper; bacon ,wild mushrooms, spicy sausage & cheese as well as the expected squid, pinchos and mussels. If you want a gastronomic experience I would definately recommend trying some. 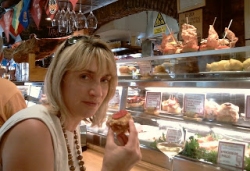 All the tapas are displayed behind glass and you can walk up and down pointing to whatever takes your fancy - at this tapas bar all the dishes are labelled in both Spanish and English. The prices vary depending on which ones you choose but are between 1.50€ and 2.20€ and you get a small one on the house too..... so our 4 plus 2 complimentaries & 2 glasses of wine came to under 11€..... which we paid for - it wasn't on the house! A hint to tell if a tapas bar is good is to look at the floor - if there are lots of serviettes screwed up and thrown down that means its good -really!