Ricky's latest music single " I speak no Spaniardo"  is available NOW to download on i-tunes. He, alongside the production team and fans were  at "The village Pub" in Benidorm this morning filming a video to go alongside the release.
The lyrics have been written & produced by Patrick Ahere, brother of Caroline and Maurice Cheetham who have the record label "Millie On Air" ... so named after Maurices daughter Millie. 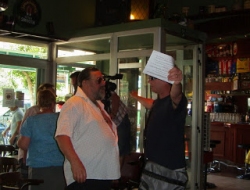 Ricky, always the perfect gent was only too happy to stop and have photos taken with fans who wanted a memorable holiday pic of them together and took time to chat with the extra's participating in the shoot. Here fan and local resident Jennifer Watson of Villa Joyosa even had a shot sat on Rickys lap!

Ricky is a great fan of Benidorm and has a house in Albir ... he can often be spotted in the local restaurants when over.

He has another Xmas special of "The Royale Family" coming out  this Xmas and is busy working on other projects. Good luck with the single Ricky ... and don't forget its only 99p to download  on i-tunes- with its catchy tune and ammusing lyrics Im sure it'll be a hit. The video will be available on "you tube" shortly.