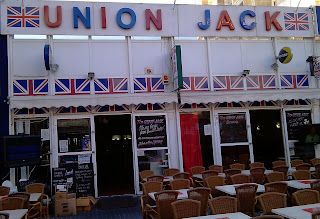 Last Saturday 26th February Pat and Ted of the Union Jack Bar in Benidorm organized a charity event to support Emaus.
Emaus was founded in 1979 in Altea and  deals with children that have been taken into care because of the impossible family environment they were living in. At present Emaus runs 8 childrens shelters, occupational workshops and a counselling service. The children's shelters have nearly 80 children living in them with an age group ranging from newborn to 18.The association is very protective of the childrens privacy as they  are placed there by the Social Services, so enabling the children to live in a family atmosphere.  It is partly funded by the government but not nearly enough for its needs.

Pat and Ted  ran raffles, brick a brack sales and made collections from other ex-pats bars. On the day all the staff were in fancy dress and any tips received were donated to the Emaus fund. A total of 1250€ was raised at the bar. In addition the golf society, which is based at the Union Jack Bar ran a charity golf tournament with an entrance fee of which 10€ was donated to the Emaus charity. Promotional gifts such as hats, golf balls etc were auctioned off raising a total of 544€. It was a good day for Emaus with British support from both locals and holiday makers. Well done !