New Roundabout on the N332 for Alfas near Benidorm

If you are a regular traveller between Alfas del Pi and Benidorm this  good news is for you. Works have started on the  construction of the new roundabout  on the N322 with a new  access  road to Alfas. 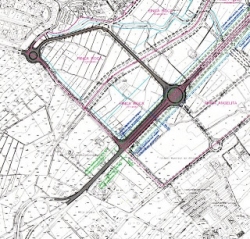 As shown on the picture of the plan, the new roundabout is set  away from the existing junction towards Altea. At this roundabout there will be a new road constructed with a bridge over the tram tracks, and ending with a new roundabout on the existing  Alfas road. The works, I have been told, should be completed by 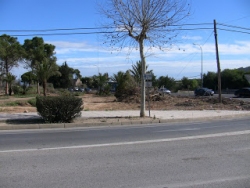 June. The official smiled and said they may even finish earlier.
Which ever the case it will be a welcome improvement on this junction. The  traffic lights which are in place now, work fine during the day, but at one in the morning, when there is little traffic, the lights are a hinderence. The sequence of the lights  is not programmed for volume of traffic but is set  on a timer. You could be stuck on red  waiting to turn left into Alfas, when you can see nothing coming for miles and you just sit there and wait.
There is bound to be some disruption with all this work, but by summer  the traffic should be running like clockwork. Hopefully. 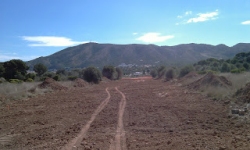 Path of the new road over the tram track 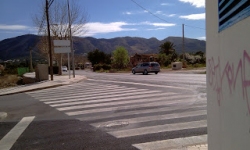 Area of the new rounabout on the existing road to Alfas