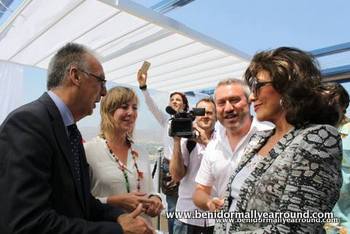 Thanks to the filming of the ITV comedy series, Benidorm is possibly one of the most recognizable holiday resorts in Europe - and the man at the helm is Agustin Navaro. I had the pleasure of meeting the Mayor in his office today, which is in the main Town Hall building located at the edge of the Old Town.

Rise through the ranks

Agustin Navarro has been Mayor for the last 5 years (since 2009), but told me that sometimes it feels like 50!  He represents the PSPV party, which is the equivalent of the Labour party in the UK, although he has been involved in local and regional government since 1990. He started work in the Benidorm Town Hall, in the tax department and worked his way up to be the secretary of the then Socialist Mayor. From there he continued his climb up the political ladder before being elected into the top job of Mayor. 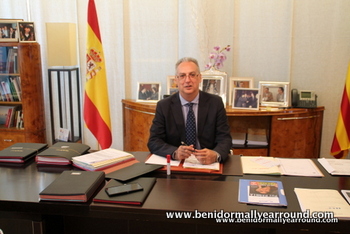 Although he lives in Benidorm - and only about a 10 minute walk away, he drives to the office. A bit like me I thought, not too fond of walking but not for that reason at all. He told me that if he walked it would probably take over an hour, with everyone stopping him en-route to ask a question or consult him about something... I get the idea that he is actually talking from experience here.

Beng Mayor is a difficult job at times, especially in the current economic climate. Many essential projects have had to be put on hold due to lack of funding, which damages the local economy and causes ill feeling with residents. Thankfully private investment continues, as is apparent from construction like the new casino on the Avd Mediterraneo - which is due to open next month and the themed leisure resort at Terra Natura, both of which will attract more tourism to the resort and in turn help keep the local economy going.

No time for foreign holidays 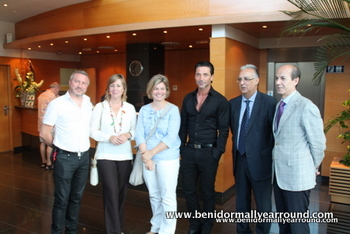 He is father to three children - well two are grown ups, a daughter of 24 and son of 22 and another son of 6 from his second marriage. Despite having a young child he doesn´t get to go on holiday as we would - being Mayor is a 24 hour/7 day a week job and he tends to only take long weekends, enjoying time on one of the local sandy beaches which Benidorm is famed for. Maybe for this reason neither of his children have followed him into politics! 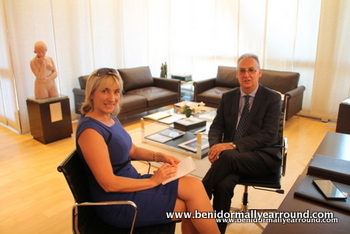 But it does have its upside he told me as he was off to meet actress Joan Collins following our meeting - at the Hotel Madeira Centro, where they had been filming this morning. The team have been in the resort since Mid March and filming will continue until the 27th of this month. In addition to around 40 British crew, a further 50 Spanish residents are employed directly by the Spanish production company. Local businesses are also feeling the windfall and it is estimated that the resort has benefitted by about 2.5 million euros during the filming period alone. With the series also broadcast in Holland, Germany and surprisingly India, it is globally recognised and does much to raise the profile of what only 50 odd years ago was a tiny fishing village!