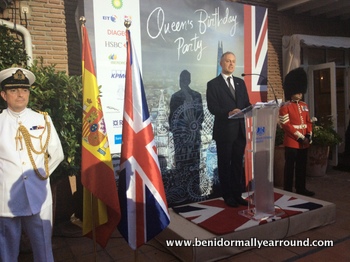 The British Ambassador to Spain, Simon Manley CMG hosted a reception at his official residence in Madrid on Thursday to celebrate HRH Queen Elizabeth II´s birthday. The event was a grand affair - with over 600 in attendance and was a fantastic opportunity to showcase the Best of British.

Simon Manley succeeded Giles Paxman as Her Majesty´s Ambassador to Spain, taking up office in October 2013 . 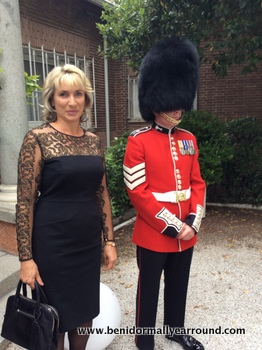 Guests were greeted at the entrance by a Grenadier Guard in full iconic bearskin and traditional red uniform - initially I and many of those queuing to get inside thought it was a statue as he was so still! The distinctive uniform is what many tourists to the UK associate with all things British and yesterday the ceremony of Trooping the Colour took place in Central London, a fabulous military parade of the Grenadier Guards to mark the Queen´s official birthday. The Spanish guests in particular were very excited and almost everyone wanted a photograph taken standing beside him - I think that I started it off...opps. Somehow I don´t think that he flew over on Ryanair - the weight of the bearskin and military uniform would have taken up his entire luggage allowance! 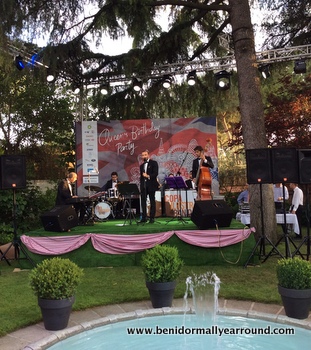 The Ambassador and his wife Maria Isabel, greeted every one of the guests - who waited patiently in line to have a few words upon entering the residence before making their way into the garden. Many Spanish military personnel were in attendance, in full uniform - adding to the importance of the occasion. Representatives of major British businesses in Madrid such as BP, BT, KPMG, The Royal Bank of Scotland and Kings College - a leading British school were also invited. A band played and serenaded the guests with some typically English tunes while Embassy staff circulated throughout the evening, all wearing distinctive rubber wrist bands to identify them - even the Ambassador had one on I noticed. 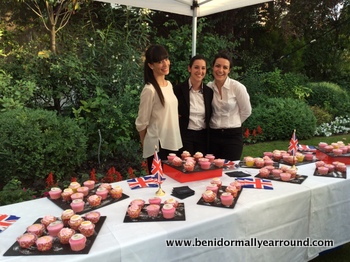 A number of stalls and marquees were dotted around, with typically British products. The cheese stand you could smell before actually seeing it, but had a fantastic selection of classic English cheeses which proved very popular. My personal favourite was the cupcake stand with some beautifully decorated pretty pink cupcakes. Waiters walked around, decked in Union Jack aprons offering some classic British canapes, such as bite size yorkshire puddings with roast beef, devils on horseback and sausage rolls which all went down a treat. At 9.30pm the Ambassador called for everyones attention and made a speech, emphasising the importance of the close ties between British and Spanish businesses here and the good working relationship had between them. To close, the National Anthem was played before everyone raised their glasses to "The Queen". 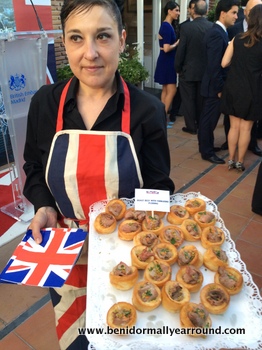 The weather was perfect for an evening reception, but on speaking with the Britsih Ambassador he told me that the previous day the heavens had literally opened and torrential raining poured all afternoon. I asked him what they would have done had that happened today - to which he replied that there was no plan B! I suppose it is rather difficult to have an alternative with such large numbers involved, but thankfully, although the grass was a little soft which the ladies in heels noticed before the gents, everything went accordingly.

I felt sincerely honoured to have been invited and represent Benidorm - who knows, maybe some of those I spoke with now feel roused to come and visit our fantastic resort. However, I will certainly think twice about driving to Madrid again. The motorway journey took 4.5 hours, then we spent 2 hours driving around the centre getting lost and somehow managing to go through the same tunnel four times - much of the road system is underground and we quickly found out that the sat nav doesn´t work there! It will be the AVE next time for me...