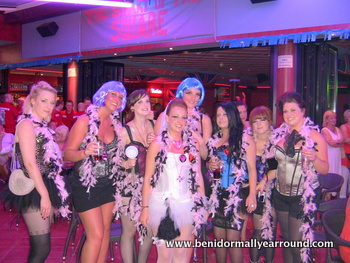 Benidorm police are starting to crack down on establishments for not complying with regulations - in particular with reference to noise pollution. The hospitality and nightlife business is extremely important to the economy of the resort, but there needs to be a balance with the rights of the residents too - not an easy task by any stretch of the imagination! Many Brits come on holiday to Benidorm specifically because the alcohol is so much cheaper here than back in the UK and there is an almost round the clock party atmosphere. The town is rife with Stag & Hen parties - something of a controversial issue with family groups, arriving on a Friday for a 3 or 4 day manic drinking session. Some hotels have even banned large groups of Stag and Hens or discouraged them by stipulating very large deposits in case of breakages. 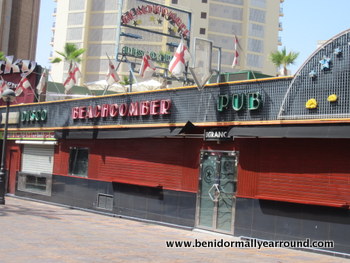 On Thursday, one club - "Beachcomber" located in the heart of "The Square" was closed down by the police for continually flouting the law and the music system was taped off for the remainder of this week. The Square is a popular destination for the Brits, especially the Stag & Hen groups,who head there knowing that it is open late. The regulations state that the doors have to be closed so that the music does not carry - and that Beachcomber in particular have been warned several times about this. The police also discovered that staff hired as security personel did not have the appropriate training certificate, which is a requirement by the Generalitat - regional Government. 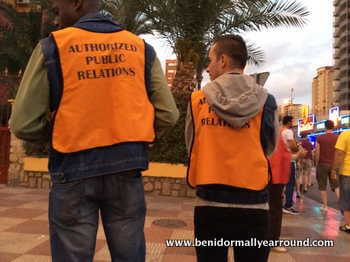 Local police are also prosecuting three other establishments - not directly on Calle Mallorca, which is the name of the road where the square is located, for employing workers who are in the country illegally. They have not named the places but in a statement referred to them as places which offer "erotic shows"! There was also an issue with the staff which were employed as inviters. Following the introduction of new rules to clean up the streets of Benidorm, club and bar promoters - often referred to as inviters, are required to wear high visibility vests and identification stating which establishment they are working for.The police are making regular checks, fining the bars heavily for those promoters found working without their vests and ID and found some that were working without a contract. 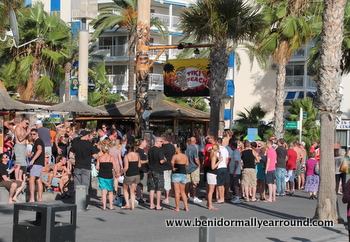 However, despite ongoing complaints from residents the Council are seeking to extend the opening times based on the arguement that "Benidorm is a tourist town and relies heavily on tourism". These special extended times would only be applicable until 30th September and allow restaurants to remain open an extra hour - extending it from 1:30am until 2:30am and "pubs,clubs and cabaret bars" extended until 4:00am. But the police union has said that many already breach these times, with some, particularly on the beach and the Rincon de Loix areas open until 5:30am. Over 300 letters were sent out in the week advising owners of the regulations, such as closing all doors and windows after 00:30am, the volume control on outside speakers and that no live music should be played between 2:00 and 5:00pm - as it is siesta time! This one I feel will be rather hard to enforce - just walk along the Levante on any afternoon and listen to the noise emmiting from both Tiki Beach and Daytona to name just two. Even without music, the volume of noise generated from the people alone is deafening, not to mention them taking up most of the road! 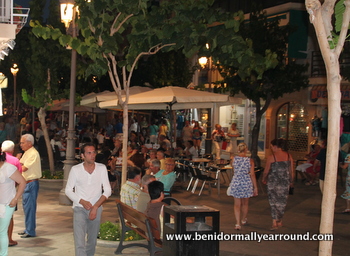 There were many problems in the Old Town last year following persistent complaints over the Summer months from the residents about noise! Those living around a square at the bottom end of Avd Ruzafa instigated a "hate campaign" over the Summer period - they continually threw buckets of water down onto the customers of bars and restaurants sitting at tables below. The police were called out almost on a nightly basis as tempers rose between residents and restaurant/bar owners - wonder what will happen this year as we enter the busy peak holiday season. Spain is renowned for its relaxed laid back cafe style culture and late nights - often weddings and concerts do not even begin until 10pm throughout the hot Summer months here.

+2 #5 Ian Jeff 2018-05-23 22:11
Beware them bounces are out to hurt and i mean hurt.iwitnessed it 8 onto one kicking stamping and punching with knuckledusters
Quote
+3 #4 John 2016-09-19 21:26
I was in Benidorm for the weekend for a Stag do, we all had a fantastic time and would definitely recommend it, thers no shortage are great bars and clubs to visit anytime of day or night, both alcohol and food prizes are very cheap, we got Taxis home after every night from one of many Taxi ranks and were not over charged once. But with any popular location where the Alocohol is cheap i would recommend you stick together, there were 13 of us and everyone looked out for each other, however others were not so lucky, we witnessed girls passed out at roadsides and in flower beds, others were face down on table with there mates laughing, one girl was being stalked by a group of local lads, until Bouncer scarred them off. At breakfast we heard how one unconscious girl was sexually assaulted by a cue of up to ten Guys in a mens toilet, all i can say is be careful, have a good time, but live to tell of it.
Quote
+3 #3 thomas 2016-03-12 12:57
The bouncers in the square are scumbags. I have witnessed them beating innocent people. When one attacks the come from all nearby clubs and join in to attack. Such a disgrace. These security are a disgrace and the police do nothing when reported. There needs to be measures put in place to protect tourist and reform benidorms corrupt security. I loved benidorm but would not return as it is too dangerous. Especially for young lads and stags stay away!
Quote
+1 #2 Claudia 2015-11-15 04:11
Im a white Canadian girl and I got racially and sexually discriminated by the Moroccans who run Beachcomners. Good music and decent prices but beware!
Quote
+4 #1 Bonnie 2014-06-22 12:19
Appreciating the time and energy you put into your site and in depth information you present.

It's great to come across a blog every once in a while that isn't the same outdated
rehashed material. Fantastic read! I've bookmarked your site and I'm adding your RSS feeds to my Google account.
Quote
Refresh comments list