Benidorm news - it is still a family friendly resort 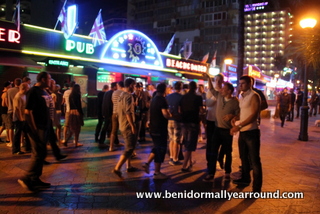 For a change it was not Benidorm getting a slating in the British press this week – instead the shame fell to Magaluf, on the Spanish holiday resort of Majorca. A shocking video went viral on the social media network of a young British girl, who was on an organized bar crawl, performing a sex act on a line of men to win a free drink! The Mayor and local politicians were outraged at the damage it has done to the image of the resort and are mounting a PR campaign to attempt to restore the image and persuade holidaymakers to return.

Benidorm - a Stag and Hen magnet 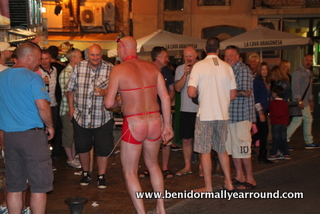 But holiday resorts such as Magaluf and Benidorm are a magnet for young Brits, hell bent on drinking to excess – made possible thanks to a combination of the cheap alcohol on offer and affordable airfares. Stag and Hen groups flock to Benidorm, much to the dismay of many, especially family groups, who are fed up with the rowdy behavior which they exhibit. But it is a lucrative business for the bar owners and although they shake their heads at the behavior exhibited by drunken Brits, their livelihoods often depend on them. 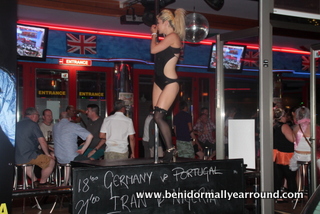 Unfortunately parts of Benidorm – namely the English Square and immediate area, which are notorious for binge drinking, appear to be turning more and more into a seedy strip. The norm appears to have scantily clad girls gyrating on podiums to attract groups of men – Stag parties in particular. This is a fairly recent arrival, with bars obviously needing to compete to entice passing customers in, making it a virtual no-go zone for families in the evening – a complaint I have heard many times. But you need to remember that this is a very small contained area in the Rincon de Loix and Benidorm has so much more to offer to visitors. 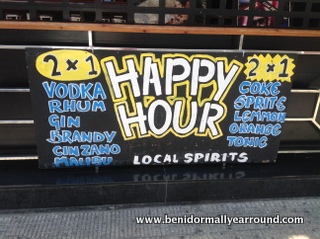 Benidorm is a city that never sleeps and the nightlife is second to none - where in the world can you have an entire evenings entertainment for free? The variety and quality of acts is second to none – from tributes, comedians, singers and magicians, the majority suitable for all age groups. There is certainly something for everyone here. As for the rowdy 18-30 type groups, you will get them in every city around the world. My words of wisdom for what its worth are parents, teach your children some morals and "kids", have some self respect for yourself – it doesn´t mean you can´t have fun, but incidents like that which took place in Magaluf will come back to haunt that young lady in later life. Unfortunately the lure of cheap alcohol is too much - funny how it´s always the Brits at the centre of such incidents!

If you are going to be drinking to excess remember that if you have an accident your travel insurance will be invalid! This is often something you never think about, but insurance companies WILL find out and that moment of madness can turn out to be a very costly experience... most probably to your parents!