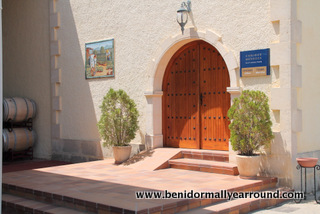 Spain is renowned for its wine and last year outstripped both France and Italy as the world´s biggest exporter! Since 1995 exports have tripled and last year, 2014, Spain exported 22.8 million hectolitres - 22.3% increase on the previous year and bizarrely, France is the biggest buyer of Spanish wine. 55% of the Spanish exports are unbranded bulk containers and France tends to bottle it - often selling it as their own "Vin de Table", with an "EU denomination" label (perfectly legal) or labelling and sending on again to other countries. France has many more years of experience and Spain is relatively new to the International market. The quality is superb and probably far superior to many other countries. There are over 4,000 wineries across Spain - many family run and often unheard of outside the village and one - Mendoza is just a stones throw from Benidorm.

Wine bodega only a stones throw from Benidorm! 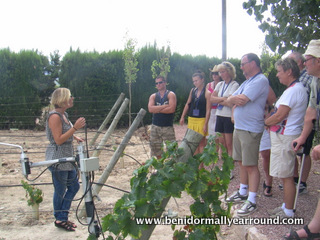 Jalon is famed for its wine producing bodegas, but surprisingly, located in Alfaz del Pi, only a 10 minute drive from Benidorm you will come upon the "Enrique Mendoza Winery". It is a family run bodega immersed in tradition - in Spain on the birth of a son it was custom to plant vines ... Enrique had 3 sons and so the beginnings of his bodega took hold back in 1970's. 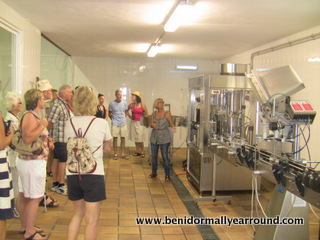 You can book a tour where you will taken around the entire plant by Magda, niece of Enrique. She is extremely knowledgeable and passionate about wine and will amaze you with facts and figures. For example, are you aware that a good quality cork can cost up to 1.50€ - in Lidl you can buy a bottle for less than that, but its all to do with quality. It´s like comparing cars - you can drive a Lamborghini or a Fiat 500 - both will get you from A to B!

Mendoza produce one of the Top 10 Spanish wines 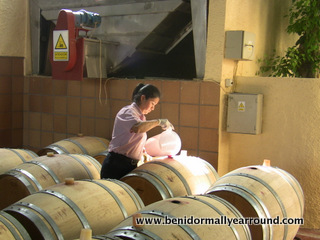 Unlike many bodega's they do not buy in any grapes but only use the ones they have grown themselves and of those, they only select the best. From the grapes grown in Alfaz they produce mainly moscatel and they have another vineyard in Villena from which they produce their Reds.
As we were there a fresh delivery was being decanted into the barrels ready for maturing. They have strict guidelines as to how long the wine has to lay for from the Diputacion. They produce ap. 300,000 bottles per year and export to many countries. "Santa Rosa Red" is listed as one of the top 10 wines of Spain - and its produced here on our doorstep. They produce predominantly red wines – but also have 2 Chardonnay and 2 Moscatel. 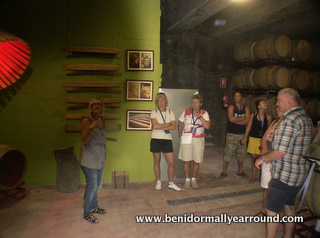 They do not use ANY pesticides on the vines but instead use traps and homeopathic methods such as cinnamon instead of sulphur and work a lot with biodynamic techniques - I was stumped on that one too but Magda explained how they work with the moon. All the vine plots are fitted with sensors for moisture, humidity and stress levels of the plants and are controlled centrally by computer.You will be taken around the cellars and bottling plant and learn about the woods used for the barrels. Did you know that once the barrels are 5 years old they send them off to Scotland for maturing whiskey! 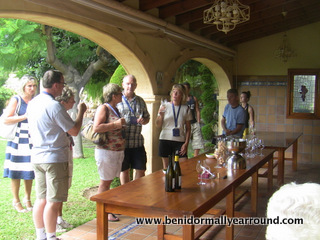 After the tour comes the best bit - the tasting! You get to try 6 - including the award winning Santa Rosa plus an incredible dessert wine - which is red! I was totally shocked as always knew dessert wine to be like moscatel ... rather sweet but this one was really fruity rather than sweet.There were also plates of tapas comprising of manchego cheese and salami's and obviously some delicious chocolate to go with the dessert wine. 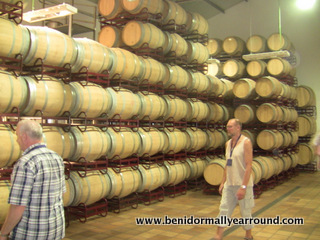 The tour costs 20€ and takes just over 1.5 hrs. You can also purchase any wines tasted in the shop at the end of the tour. I found it to be a fascinating experience and the place is set in the most beautiful gardens. They also organise private functions such as wedding receptions.

The tours are available from Tuesdays to Fridays at 10:00am, 12:00 Noon and 4:00pm and Saturdays at 10:00am and 12:00 Noon.
If you are visting Benidorm its a nice outing to get away from the beach for a couple of hours or make a great gift for a wine drinker!