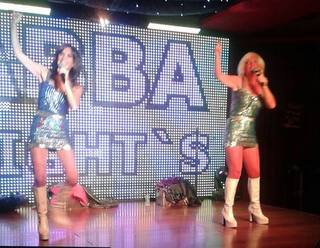 "ABBA Nights" is taking Benidorm by storm - It´s a feel good show fronted by two lovely girls, Jo and Tina who together make up the Boogie Woogie Babes. The stunning sexy pair have a dynamic chemistry which is evident on stage, as they manage to captivate the entire audience with their energy and enthusiasm.

Benidorm is great for talent 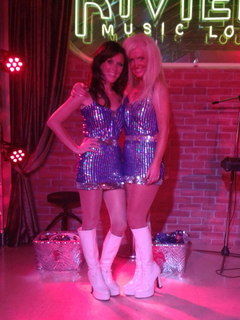 Jo Hollingworth and Tina Dresser were introduced to each other thanks to Lynn – owner of the popular Carousel Bar in Benidorm and haven´t stopped since pairing up over a year ago. Tina has been in Benidorm for only 19 months, making the move from Liverpool, but has certainly made an impact with her mane of stunning blonde hair. But she is not just a pretty face – she can sing and dance to a professional standard, which is evident having toured with Tom Jones and Bonny Tyler during her last 15 years in show biz. 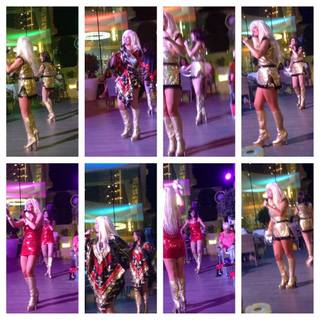 But Jo is also a very talented lady, having trained as a professional dancer and run a children´s acting and drama school for the last few years here in Spain. But now instead of hiding backstage where her talent was hidden, she is centre stage back where she belongs. Jo moved to Spain as a child and has lived in Benidorm, the Costa Blanca's entertainment capital for the last 6 years. There is certainly plenty of variety and choice on offer but every night they play to a packed venue, for which they are very appreciative.

Bringing glamour back to Benidorm 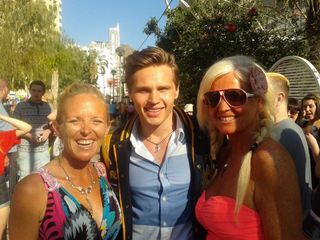 The duo have certainly bough glamour back to Benidorm – with Tina taking on the persona of Agnetha and Jo transforming into Frida, with the help of a wig. The dazzling outfits which the pair wear - getting shorter and shorter throughout the evening and accompanied with platform knee high boots, are all made and designed by Carol Warrilow, who also happens to be Tina´s mum and the pairs vocal coach. They always open the show with Mama Mia and close with Thank You for the Music – with many popular Abba hits in between which everyone ends up singing along to. 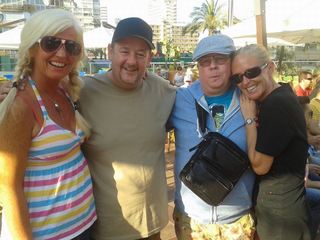 As if the pair weren´t busy enough already, they were both extras for the 7th series of the ITV hit comedy Benidorm, which was filmed in the resort earlier this year. It certainly made for a very long day, with a 6am start every morning and not finishing until after 6pm, then rushing home to shower and change before heading out again. But they loved the experience and without a doubt would do it all again given the opportunity. Writter Derren Litten often likes to feature local talent and entertainers – this year they had The Stylistics, but who knows, maybe next year ABBA Nights may be making an appearance at Neptunes. The girls already know the stage of Morgans Tavern well as it is one of their regular venues. 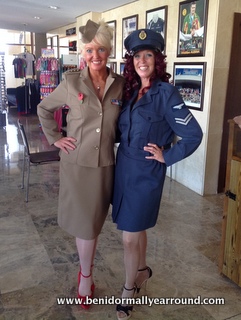 This Winter season they will also be doing another show "Pack up your Troubles" – a 40´s/50´s revival featuring classics from the likes of Dame Vera Lynn and Frank Sinatra... and best bit, they will be dressed in uniform! It´s a fantastic show and will have everyone singing along – venues are yet to be confirmed.
The girls perform as ABBA Nights 7 nights a week and you can catch then at Morgans on Wednesday & Saturday at 9pm; UK Cabaret Club on Monday & Friday at 9pm; Riviera Music Lounge on Monday & Friday at 11pm and the Explorers Club, located at the Ambassador Hotel at 10:30pm on Tuesday and 8:30pm on Thursday.