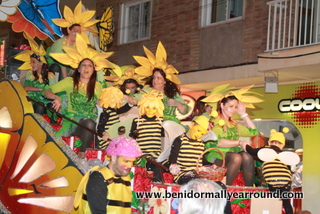 The Benidorm fiesta finally came to an end today - Wednesday, with a grand float parade through the streets of the Old Town. There were more than 50 floats taking part and each and every one was spectacular. In comparison to last years parade you could tell that financially things are definitely improving - the floats were a lot more extravagant and lavish with costumes to match. 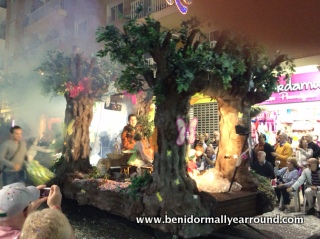 This is certainly the Spanish version of tomorrows fancy dress day for the Brits - with a huge variety of costumes that certainly wouldn´t look out of place on Calle Gerona tomorrow! The Spanish know how to dress up and the costumes were fantastic - it got many of the Brits in the crowds in the mood for tomorrow! 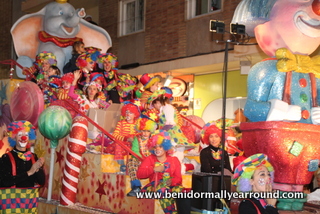 Each penya had a theme and all ages took part - from babies to grandparents. The most exciting bit, for the children in particular was the throwing of the sweets into the crowds - but it can be a rather dangerous spectator sport! There must have been tons of sweets thrown out into the crowds... I bet that the dentists of the area are happy. 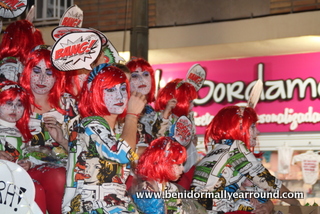 The entire route was lined with cheering crowds and the parade went on for well over two hours. The Mayor, Agustin Navarro was in the special spectator seating, reserved for VIP´s at the top of Calle Gambo, along with the fiesta organisers - cheering and clapping along with the crowds. 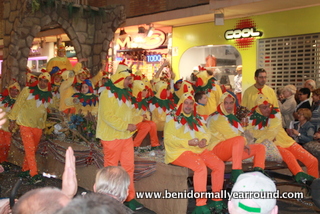 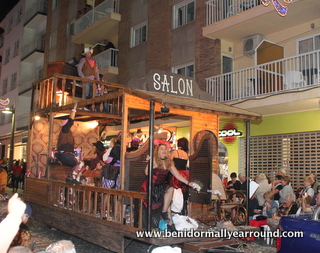 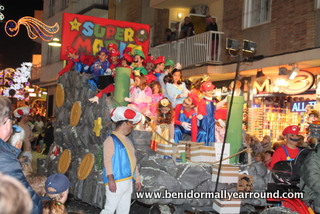 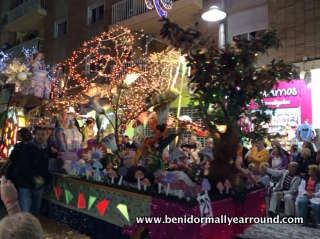 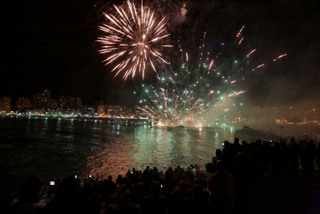 The grande finale was the spectacular fireworks, which were set off from the Poniente beach. The entire area had been cordoned off during the afternoon and as expected with Spanish timekeeping they never started at the advertised time of 9pm. For once, they were EARLY - with the first bang going off just after 8:30pm.... this must be the first time ever that something has been early. Goes to show - always expect the unexpected here in Spain!