Benidorm´s Pablo Bloom HAS got talent! 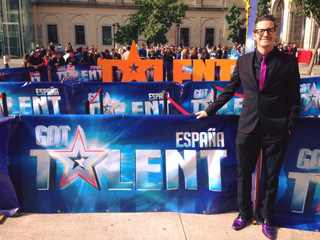 “Incredible talent” is a phrase often over used, but one entertainer here in Benidorm who justifies that label is Pablo Bloom. He really is a must see if you are visiting and many visitors plan their evening schedule around where he will be on. But he will not be a Benidorm secret for much longer following last weekends audition for “España got Talent”! This is the first time that the television talent show has come to Spain – it has been aired since 2007 in the UK and is a staple Saturday night view for many Brits. 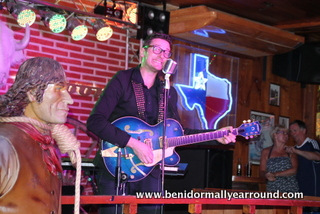 Pablo was recommended to go by a friend and fellow Spanish entertainer so sent in a selection of his work and was then invited to attend an audition in either Madrid or Barcelona. So last weekend he made the journey to the Spanish capital, accompanied by Sandra Rod – who helped with his backing vocals, Vicente, otherwise known as Elvis-Ent, comedian and good friend plus his keyboard and guitar. 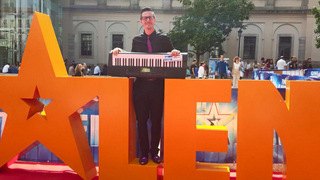 The trio arrived in Madrid, at the Conservatorio Musica and Pablo registered at 10:30am then waited, and waited and waited some more – until his number was called at 4:30pm! “You certainly bonded with those near you” is what Pablo told me and there was a carnival atmosphere with everyone singing, dancing and limbering up in the snake queue. 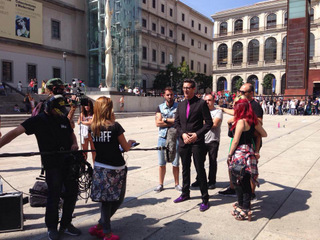 In total his day lasted 11 hours and he was filmed by a local television while waiting. He knew beforehand that he had a maximum 2.5 minute slot to impress and had to consider very carefully what he wanted to be remembered for. He is a comedy musician – interacting with his audience, telling jokes and playing various musical instruments throughout his show, so wanted to capture the essence and soul of his entire performance in those few minutes. He wrote a song specially, funnily enough about auditioning for the talent show, which took him 3 weeks to write and perfect.

Well the hard work and patience has paid off as it was indicated that he will be called up for filming towards the end of this month – which will be aired on Tele Cinco in October! We here already know the “Pablo´s Got Talent” but soon the entire country will too. He has been entertaining on the Benidorm circuit for the last 4 years and come October will be starting a comedy night at Rockstar – although initially that will be in Spanish. 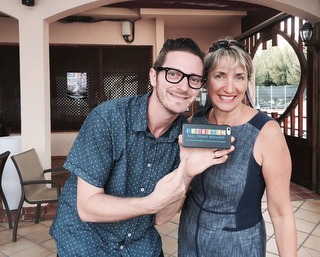 He writes many of his own tracks – and one song, Robbie Williams´ “Let me entertain You”, he has written his own lyrics too which he finishes every show off with. It encapsulates everything about Benidorm – including mobility scooters, peamen and even Sticky Vikki get a mention! Any bar he works in is always packed out and so due to demand he is about to release a DVD of his show – filmed recently at Western Saloon and will be available on his website: www.pablobloom.com and after his shows.
Pablo told me that he will record his television appearance and post it on his website and facebook page, where you can see his nightly schedule – but he first has to decide what he is going to perform and write it! He already has lots of ideas swimming about in his head – it´s just a matter of picking out what. Good luck Pablo – Benidorm is behind you….