It's all go for Benidorm series 9 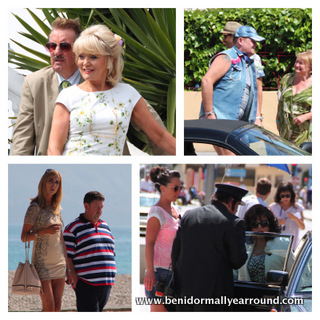 It has been officially confirmed that Benidorm series 9 will begin shooting in mid-March and have an extra two episodes – great news for all here. Pere Agullo, of “Filming Spain” – the production company used by Tiger Aspect in Benidorm has also indicated that they have provisionally been signed for series ten even though the current series 8 hasn’t yet been fully aired on UK screens. 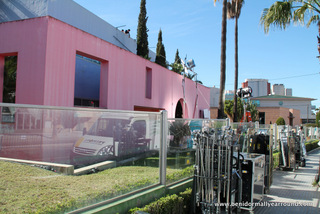 Filming often goes on around different locations in the resort – the main sets are at the Sol Pelicanos Hotel poolside, Morgans Tavern which is transformed into Neptunes and what is affectionately known as the “Pink House”, opposite Benidorm Palace is transformed to become the ficticious Solana reception. 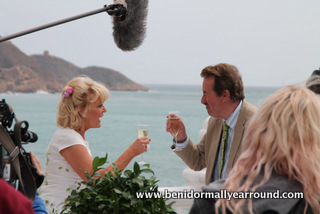 This series has also seen the Mirador in the Old Town being used as an exclusive restaurant for a scene not once but twice: Sherrie Hewson as Joyce Temple-Savage having a soiree with John Challis who everyone remembers fondly as Boycie off Only Fools and Horses and also Julie Graham and Steve Edge aka Sheron and Billy Dawson, who are part of the new Dawson family which joined the series this season. 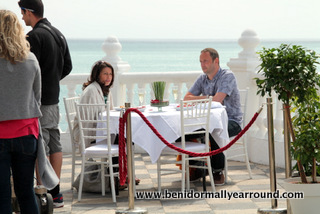 Many viewers have been emailing to ask what the name of the restaurant is as it is so convincing – sorry to say it is all a set up. In this weeks episode characters Tiger and Joey were seen hiking up the Puig Campana mountain which forms the backdrop behind the resort. It is actually only a few kilometres out of Benidorm at the Fonts Moli in Finestrat – a very popular place for walkers and hikers. Many fans look out specifically for new locations then want to visit them so it is great news when the cast and crew venture out. 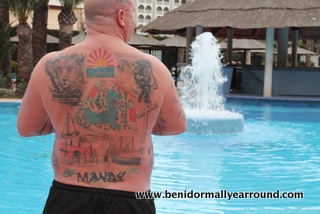 Jason Green from Wellingborough in Northamptonshire must rank as the number one fan of the ITV hit comedy series and in homage to show has had vast parts of his body tattooed with characters, signatures and locations. His very first work of art was the Benidorm logo and palm tree, on the inside arm around two years ago – and he hasn’t stopped since. Actor Perry Benson, who plays Clive Dyke in the series gave Jason the most pain tattooing wise with his signature – but it certainly hasn’t deterred him. He is back again in April for another three weeks and can’t wait – he has already been once this year and last year came four times. 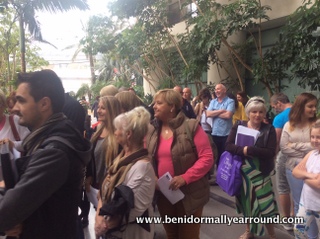 For those that want to be considered as extra's there will be a casting session on Friday 19th February at the Melia Hotel from 10:00-1:30 then again 4:30 - 7:30pm. You have to be a permanant resident and hold a social security number and NIE number. Turn up and fill out the application form they hand out and have your picture taken - they are looking for all shapes and sizes. Plenty came last year as you can see from the photograph.

During 2015 Benidorm was used by 75 different companies - in addition to the British ITV comedy series “Benidorm” and Channel 5’s documentary “Bargain Loving Brits in the Sun” many foreign music videos and commercials were shot, including ones for internationally recognized brands such as Coco-Cola, BMW and Audi.
Official figures released from the Town Hall reveal that 282 days of filming took place in the resort last year which generated €2.6 million of local spending, entailed nearly 8,000 overnight stays and employed 373 people. This is all invaluable promotion for Benidorm, costing nothing but generating income for businesses here and the Mayor Toni Perez is delighted.

Many fans will already be booking up to stay at the Sol Pelicanos hotel in the hope of catching a glimpse of the cast during filming and everyone will be speculating as to which actors will be coming to the resort this year to appear in cameo roles... and will Dame Joan Collins be back?

All Bummed Out, hehe. Liam and Kenneth in my opinion work really well together however I still think they should bring back Gavin and the Garveys. Or at least Madge

PLEASE BRING BACK THE GARVEYS
Quote
+1 #24 Pete 2017-02-25 22:02
Johny Vegas and his screen Mum were comedy gold, a spin off series of these 2 would be fantastic.
Quote
+1 #23 Maz 2017-02-17 20:23
The Garveys need to come back preferably without Madge ! Young Michael never wanted to leave anyway but both parents were finding the commitment hard with many roles elsewhere too . The whole Dyke family too Tonya was great and Bianca . Michael and Tyger were friends anyway and Michael is old enough to come out on his own now surely to hang out . Would like Mik and Janice aswell ......but atleast Michael please .
Quote
+3 #22 karl simpson 2017-02-02 16:35
Benidorm has to be the finest British comedy by far for many a year, it's a real breath of fresh air for British comedy which has in my opinion been very stale and outdated, I think we can all identify with the characters and the fantastic storylines.may we have many more years of holiday hilarity please.
Quote
+4 #21 Jayne 2017-01-22 14:14
Love the show, watch it over and over again. Really miss the Garveys, they are the best. Bring back Sam, Natalie and Trudy. Jackie needs a new husband to replace Donald, I loved the sketches when they were doing crosswords. Noreen is a darling aswell, classic. I always feel sad when the series comes to an end
Quote
+10 #20 Dannylee05 2017-01-07 20:44
Series 8 not quite as good but bring back the GARVEYS not as funny without them
Quote
+7 #19 Harry Van Nes 2017-01-02 00:24
Series 8 not the best. What ever happened to the story line regarding the Oracle and Chantelle Garvey. Garveys greatly missed should be in it. Troy and Gavin should be written back in they were my favs.Still a great series, but needs an injection of Hilarity.
Quote
+4 #18 Josh 2016-12-29 10:54
Kenneth is the best hes sooooo funny and the garveys need to come back. i want the dawsons and the garveys to meet!!!!!
Quote
+11 #17 Dave 2016-10-19 12:17
The Garveys must come back, also bring back Clive. He plays the part so well and a natural actor. Not so sure about the Dawson's though?
Quote
123
Refresh comments list