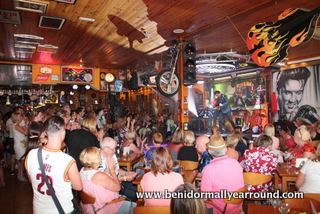 The three Day Elvis Fest kicked off in Benidorm today and hundreds of fans have flocked from across the globe to enjoy the extravaganza, dedicated to their idol. This is the sixth successive year that the event has taken place, growing bigger and better with each year. 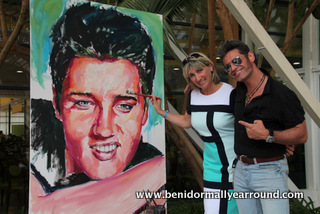 For the first time local artist Tachi left the crowds speechless with a live demonstration – painting a 2 metre tall face of The King of Rock & Roll in around an hour, to tremendous applause. Tachi is like the Andy Warhol of the Costa Blanca and painting is his passion. He has exhibited around the world and art is his life – he lives to paint rather than paints to live. 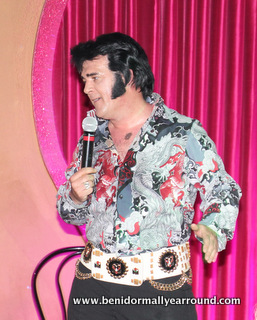 Many of the fans turned out as Elvis look-a-likes, with the uniform quiff, sideburns and loud clothing… it’s great just going along to watch the fans. 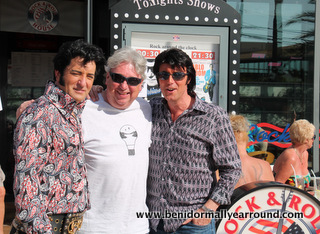 I caught up with organizer Peter Phillips outside the Rock & Roll House, pictured with 2 ETA’s – Mike Nova and Garry J Foley (with sunglasses), who has just come back from an Elvis tour of China and India! Peter is the brains behind the mega Porthcawl Elvis Festival in Wales, which attracts in the region of 35,000 fans every September.

He is delighted with the way the Benidorm Elvis Festival has taken off and told me that the Sunday night closing finale at Benidorm Palace is already sold-out! In fact, he said that today alone they could have sold another 200 tickets and many fans have been left disappointed. You’d think that he would take a few days break after the hectic weekend but no, he is heading off to Transylvania for a “Vampire Arts Festival” which involves screening over 80 vampire films and working on his most exciting project to date, a Noel Coward convention at Firefly – what was Coward's historic home in Jamaica and now listed as a National Heritage Site. Peter is collaborating on the project with Gyles Brandreth – writer, broadcaster and actor who he met when he appeared on The One Show which Gyles was hosting, where they discovered a mutual interest and admiration of Coward. 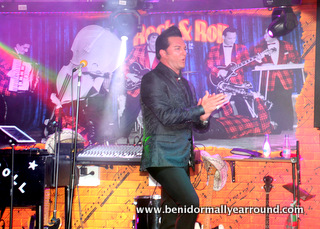 Benidorm’s own Elvis – Simon Patrick is taking part, but if you haven’t managed to get tickets for this year’s event then you can watch him performing here throughout the year, exclusively at Rock & Roll House. Sunday nights finale at Benidorm Palace, if last years is anything to go by, will be phenomenal, with all the ETA’s on stage together.

If you missed out then you can already book your place for next year on Sunday at 12 noon at the registration desk at the Melia hotel lobby on the ground floor. The date is 21st-23rd April 2017… mark it in your diary.