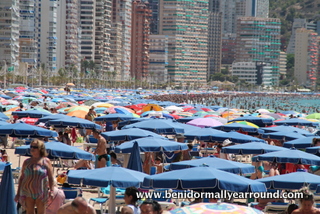 As the issue of security and what are deemed ‘safe resorts’ come to the forefront ahead of the busy holiday season, tour operators are warning that there will be a shortage of sunshine hotspots to places such as Spain, Portugal and Italy in response to terror attacks.

Holiday companies have already seen bookings to Spain up by nearly 40% against last year’s figures and as demand rises for limited places, so inevitably will prices.
Security here in the resort has been a contentious issue, thankfully not terrorism related, but lack of policing in general around known ‘crime’ hotspots and boisterous party areas. 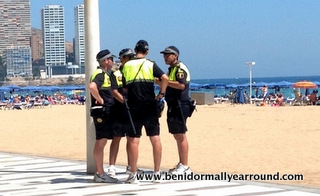 Now opposition parties here in Benidorm are wadding into the argument, criticizing the lack of action being taken by the current minority ruling PP party. Ruben Martinez – spokesperson for the opposition PSOE party has highlighted that the promised beach police have still not even been contracted, which should have been done by the beginning of the year and consequently puts into question if they will even be ready by June. 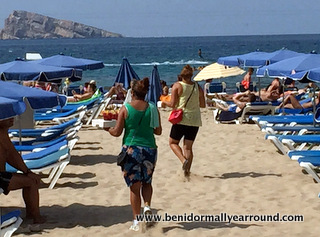 The repercussions are only too evident, with illegal beach sellers out in force on the Levante and peamen regularly setting up their pitches along the promenade. He also claims internal conflicts within the PP – who only have 7 councillors as it is are at odds with each other and that the Security Councilor – Lorenzo Martinez is not part of the ‘inner circle’ of decision makers hence the delay in construction of the much needed new police station and SATE office in the Rincon. Maybe this explains why so little is actually getting done? 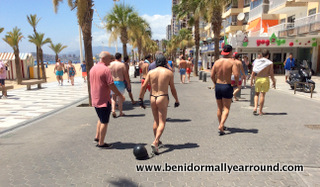 Rafa Gasent – spokesperson of Ciudadanos, another opposition party has also added to the criticism being heaped on how the resort is being policed. He claims that there is too much confusion with laws and regulations, which need to be simplified to benefit and protect the image of Benidorm. ‘Binge tourism’ – hard core partying, is on the rise – once contained to certain areas such as the Square, but now moved to the beach front bars, is damaging the reputation of the resort. 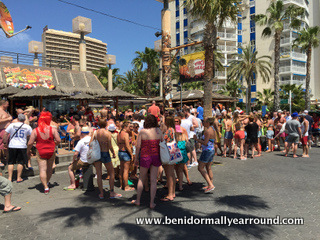 But British Stag and Hen groups are not the only culprits, apparently party buses full of end of term Spanish adolescents flock from Madrid, leaving in the afternoon to party and drink the night away. Decency laws already exist forbidding disorderly behavior in public, but take a walk around on a Friday afternoon and you’ll be left to wonder whether they really do exist. 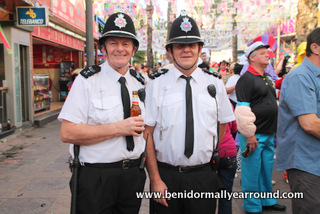 There was talk by the ruling party that British bobbies would come over to help police the out of control Brits, but cold water was poured on this ‘idea’ by the British Consulate. I think the only British bobbies we'll see here are for the British Fancy Dress day in November! Lets hope that the influx of tourists this summer will fill the coffers of hoteliers and businesses, who pay their taxes to the Council and in turn, their voices and views should be taken note of. More pressure should be put on Central Government to recognize Benidorm as an official tourist destination and so afford extra funding…Ostriches spring to mind!