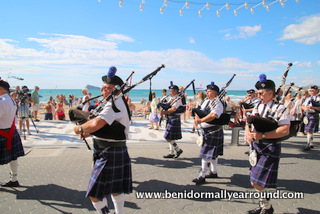 The 2016 Poppy Appeal was launched in Benidorm yesterday with a spectacular parade, led by the Torrevieja Pipes and Drums along the Levante promenade – making for an incredible backdrop. The sound of the bagpipes drew crowds off the beach and spectators lined the route, applauding as they passed. 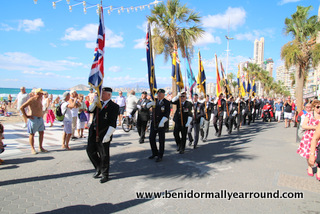 The immaculately turned out Standard Bearers followed – including one lady this year and behind them two gentlemen who rightfully earned the biggest applause and respect from all, the Chelsea Pensioners, wearing their distinctive scarlet coats and medals. 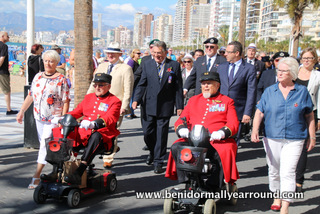 The Mayor, Toni Perez walked behind, accompanied by the Vice Consul Sarah Munsterhjelm, Lt Col David Whimpenny, Captain Paul Lencass, Mr Nigel Hails – Chairman of District North of RBL in Spain and Robin Hargrave – the Poppy appeal co-ordinator. The parade finished at the end of the promenade and officials took to the stage, where The Rev Ray Andrews, Service Padre gave a prayer of thanks to start the ceremony. 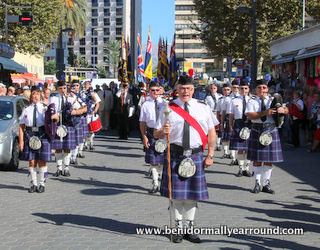 On May 15, The Royal British Legion celebrated the 90th Anniversary of its founding and the first every poppy appeal was launched on 1st November 1921. This year – 2016 marks two important centenaries: Battle of Jutland and Battle of the Somme, lasting 141 days and for which 51 Victoria Crosses were awarded.
The Royal British Legion is the custodian of remembrance and the poppy is the symbol of remembrance and hope. It was founded to care for survivors of war and their dependents and to this day, many rely on their help and will continue to do so with continuing conflicts around the world. 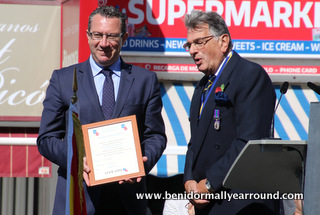 Nigel Hails presented the Mayor with a Certificate of Appreciation on behalf of the RBL in Spain, in grateful thanks for the support and help that the Town Hall give each year to launch the poppy appeal. The Mayor congratulated the RBL for all their hard work and dedication, encouraging them to continue the excellent work they do. 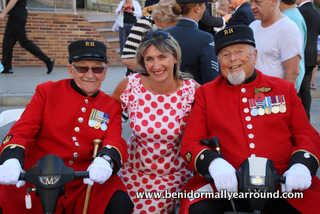 After the ceremony the Standard Bearers marched out to the sound of the Pipes and Drum to much applause then everyone headed to chat and shake hands with Arthur “Skippy” Teasdale, aged 87 and Wayne Campbell, aged 79.

There was a stall selling poppies and poppy related items and over the next month many bars and restaurants will have collection tins – please give generously to support this worthy cause. Wear your Poppy with Pride “In Flanders Fields, the poppies blow. Between the crosses, row on row”