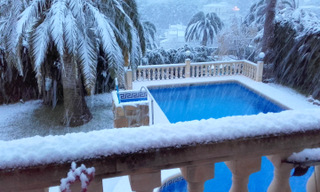 We heard the weather warnings but laughed… until waking up this morning that is! Yes it really was snowing along the Costa Blanca – not much in Benidorm, although if you check out the forecast for tomorrow it shows Benidorm is due some! Seeing an outdoor swimming pool and palm trees covered in snow just looks so wrong - we never came here for this... where's the sun! 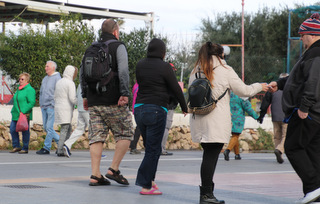 Forget the shorts and flip-flops… although I did see many this morning walking around the Rincon area and pack your winter woolies instead. Just look towards the mountains framing Benidorm and you can clearly see the snow capped tops. 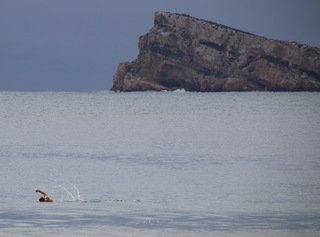 I actually even photographed a man swimming in the sea today - unsurprisingly, he was the only one! There wasn't even a soul on the beach and those walking up and down the prom were wrapped up with hats, scarves and gloves. Only a few die hard fans were sitting on the Tiki Beach bar terrace, determined to enjoy that pint of beer! 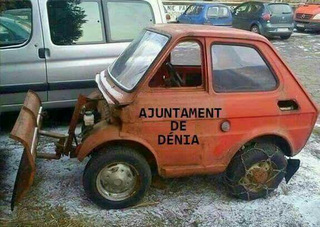 The tram to Denia was cancelled and the AP7 toll road was shut at Ondarra, the turnoff for Denia/Javea…..we have never seen anything like it. The funniest picture has to be of a micro-car, belonging to Denia Town Hall with part of the front removed and what looks like a DIY snow plough attached, with a chain wrapped around the rear bicycle like tyre – real hardcore! 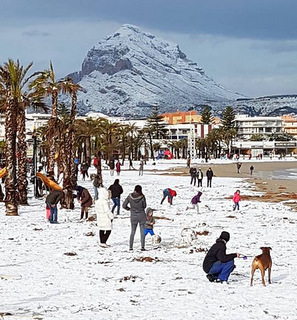 Javea has been rather badly affected and the snow even managed to settle on the Arenal Beach... it was like an optical illusion to see. I wonder whether we will experience similar scenes in Benidorm tomorrow?

Whereas normally people would be building sandcastles on the beach today they were building snowmen and having snowball fights! 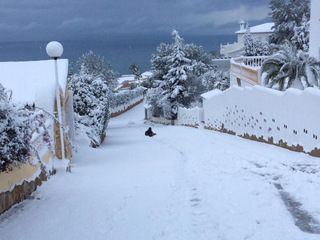 With the cold snap it is a real disgrace that Iberdrola – the national electricity supplier has announced that they are hiking the prices up because of demand. In protest everyone is being asked to switch off their electricity at 7pm for 20 minutes. The hourly megawatt price will be 33% more than this time last year, with the most expensive rates between 6:00pm and 10:00pm.